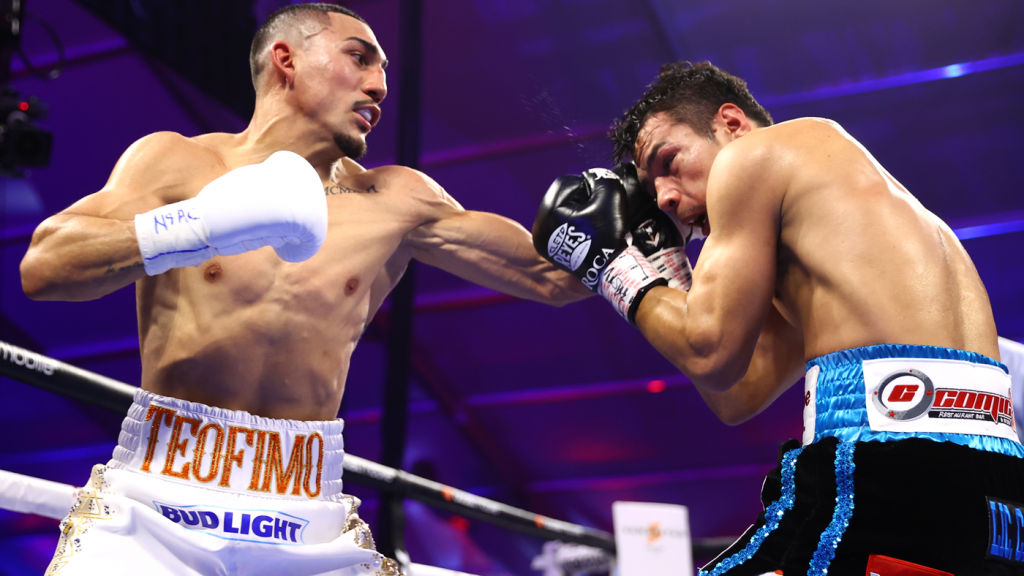 Nine months ago, Teofimo Lopez experienced a shocking fall from the top of the boxing mountain after an upset loss to George Kambosos Jr. On Saturday night, Lopez debuted at junior welterweight and got back in the win column with a dominating seventh-round stoppage of Pedro Campa.

Lopez wasted little time trying to make a statement, coming out in the first round and winging power shots at Campa and connecting on some quick hooks and uppercuts. Campa didn’t back down, instead retaliating with a few clean punches and pressure before Lopez punctuated the opening frame with a crisp left hook at the bell.

The first time Campa looked truly bothered by Lopez’s power came in the third round when he was briefly stumbled by a Lopez right hand. Still, as Lopez continued to land heavy blows, Campa took the shots well and even taunted Lopez as if to say, “You can’t hurt me.”

That seeming inability to truly hurt Campa played into one of the main narratives coming into Resorts World in Las Vegas as some wondered if Lopez could bring his power with him as he moved up in weight.

The ability to absorb Lopez’s shots over the first half of the fight did not translate to the ability to win rounds for Campa, however, and despite his willingness to walk forward and exchange blows, Lopez was simply too fast both offensively and defensively.

In the early moments of Round 7, Lopez sprang forward with a right cross and rising jab that dropped Campa for the first time in the fight. Lopez, sensing he had finally broken down his opponent, began to taunt and showboat, dancing in front of Campa before unloading with a flurry of punches that forced the stoppage at the 2:14 mark of the round.

Prior to his shocking loss to Kambosos, Lopez had become the undisputed lightweight champion with a career-best showing against Vasiliy Lomachenko in October 2020. Lopez claimed that a host of health problems that nearly killed him were at play during the Kambosos fight — while also insisting he won the fight despite clearly deserving the decision loss he’d received.

After the loss, Lopez also made it clear that making the cut to 135 pounds was something he no longer felt he could physically do.

Now, having established himself at 140 pounds, Lopez is in a division with plenty of dangerous names, including Josh Taylor, Regis Prograis and Ryan Garcia, who also just made the move to junior welterweight.

“Like I said, we’ve been at 135 for about nine years and it was killing my body. I just turned 25, we want these guys, we want Josh Taylor and Prograis,” Lopez said before he was asked if he would be interested in a fight with Garcia. “If Josh Taylor is too busy with his wedding and there’s no one else around, then so f—ing be it. I’ll fight all those boys and take all their dreams away.”