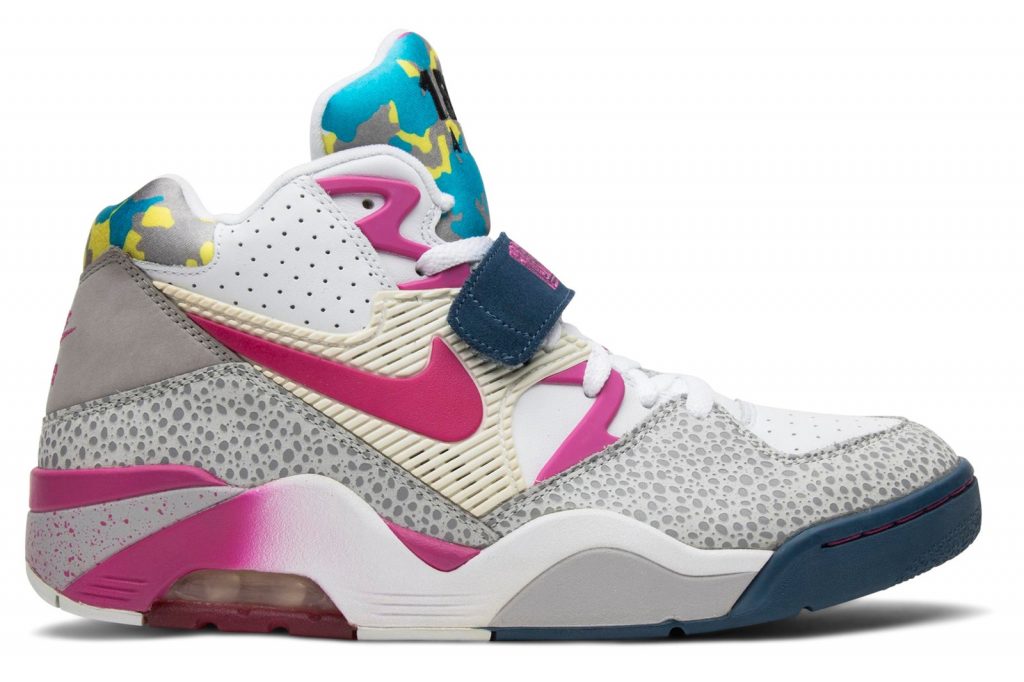 It took a lot of convincing for Nike to let Stephen “ESPO” Powers make the company’s first-ever see-through shoe. “Nike’s in the business of performance,” the street artist says, and his concept of an invisible all-plastic sneaker didn’t quite jell with that. “I steered it back to their comfort zone by saying it was going to be a performance shoe, but it would be performing as art.” Even then, Powers remembers, Nike’s first draft was only partially plastic. “I said, ‘Come on. If Jellies can do it, why can’t Nike?’” Eventually, Powers and Nike landed on a design that balanced large transparent panels with original ESPO artwork, and came with a special pair of socks to boot. As proud of the finished product as he is, Powers admits Nike might have had a point about the performance. “Within two blocks, the plastic was cutting my feet,” he says. “Those shoes went back into the box and I never wore them again.”

Union’s take on the Air Force 180—designed by the influential L.A. boutique’s then manager (and current owner) Chris Gibbs—reads like a time capsule of streetwear’s aughts heyday. “I was fresh off the boat from NYC and heavy into ‘90s basketball silhouettes, so I gravitated towards the 180 because it was a great representative of that era I loved so much,” Gibbs says. “Streetwear was a rebellion against the fashion industry at large, which typically only played in blacks and navies, so I wanted the colors to be in contrast to that. I took the camo from my favorite jacket and changed the colors around to be more playful. It was probably inspired by Bape, who was doing a lot of that at the time.”

When Nike SB tapped Jeff Staple to design a New York-inspired Dunk, he cycled through all the obvious references. “We thought about a Statue of Liberty Dunk,” Staple says. “A subway Dunk. A taxi Dunk. In the end, we decided that the pigeon was the unofficial mascot of New York City. Not everyone would get it, but the people who lived and breathed here would.” Not only did they get it—they wanted it ravenously. The release of Staple’s Dunks, doused in feathery gray suedes with an embroidered pigeon along the heel, caused a riot outside of his Reed Space boutique in the Lower East Side. For much of mainstream America, the shoe served as their introduction to the rising hysteria of sneaker culture. “SNEAKER FRENZY,” the front page of the New York Post famously read the next morning. “HOT SHOE SPARKS RUCKUS.”

Paul Rodriguez Jr. grew up obsessed with Nike, but when the Swoosh first approached the rising skateboarder about a potential sponsorship, he balked. “At first, Nike wasn’t planning on making signature shoes for skate, and that was a dealbreaker for me,” Rodriguez says. Eventually, the brand changed its tune and granted P-Rod the first SB pro model—a retro-inflected low-top with a quilted leather heel and full Zoom Air cushioning. “I’m just happy that my teenage self stood his ground and stuck to his dream.”

Graffiti legend Stash was one of Nike’s first and most important non-athlete collaborators, paving the way for colleagues like Futura to get involved with the Swoosh soon after. He introduced his trademark tonal blue palette on an Air Classic BW in 2003, but the colorway hit its high-water mark three years later when Stash applied it as a gradient to the cascading stripes on the Air Max 95. The 95 is one of his favorites, Stash says, “because look how fucking crack it came out. One of the best shoes ever made to this day. You don’t have to touch it. That’s one of those ‘If it ain’t broke, don’t fix it’ models.”

Hong Kong streetwear stalwart CLOT’s mission is to bridge the East and West through thoughtfully designed goods. And its Kiss of Death Air Max 1—the first in a long lineage of Nike collaborations—succeeds at that swimmingly. Inspired by traditional Chinese medicine, the clear toe box (as in you can see the tops of your toes while wearing them) reveals an acupuncture chart on the insole, while the outsole is printed with a diagram outlining the pressure points of the foot.

Few Nike collaborators earned their own shoe more than did Bobbito Garcia, the New York street-ball folk hero, DJ, documentarian, author, and O.G. steward of sneakerhead culture. His Air Force 1 is blessed with a gorgeous mix of suede, leather, and mesh alongside nods to Garcia’s passions for vinyl records and basketball.

Dinosaur Jr. frontman J Mascis’s Dunk High Pro is the epitome of a simple idea executed flawlessly. “I wanted it to look like Ace Frehley’s silver platform space boots from Kiss,” he says. Mission accomplished. Doused in gleaming metallic silver with bright violet accents and the band’s logo and mascot stamped on the sides, the shoe was an instant grail that earned Mascis fans well beyond his regular listeners. “People will come up and talk to me about the sneakers and have no idea I’m in a band,” he says.

“You don’t ever truly know when it’s ready until you do the lab test yourself,” LeBron James says of his signature sneakers. Which makes sense when you consider all that’s required of them to keep up with the greatest player of his generation. “What’s tough with LeBron is that he’s superhuman,” says Nike’s Tony Bignell. “He’s so powerful that everything is stiffer, tighter, harder, firmer. How do you make something work great for him—and work for the kids who are playing in the shoes too?”