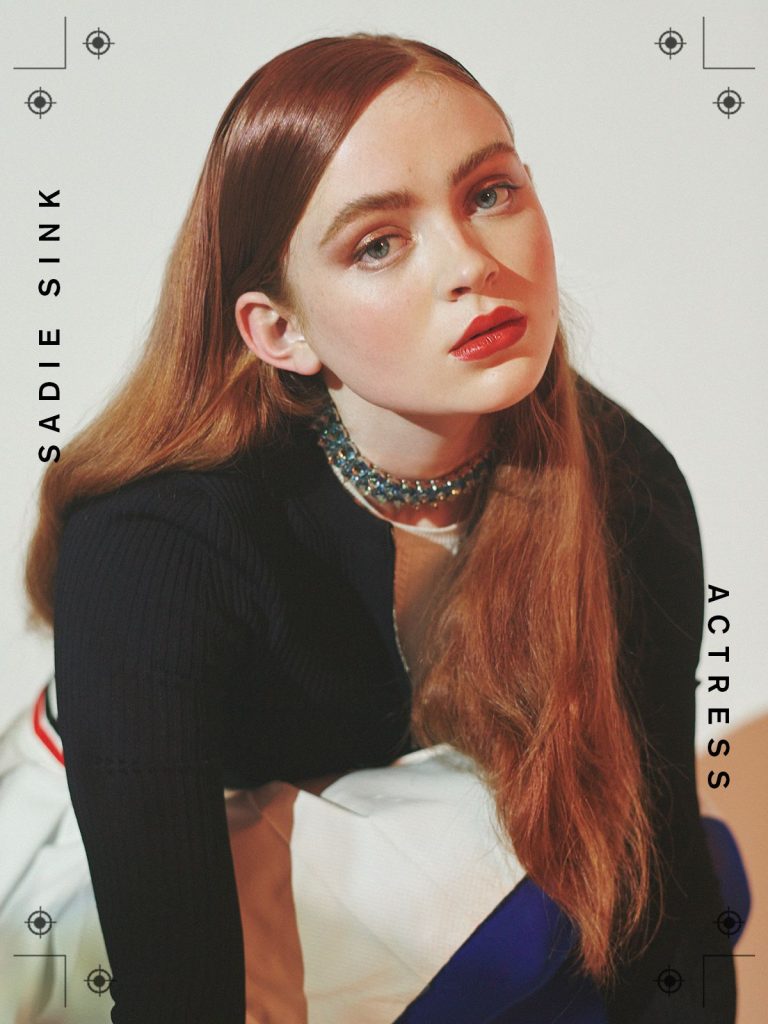 Sadie Sink may have burst onto the scene when she joined the cast of Netflix’s record-breaking sci-fi series Stranger Things in 2017, but our June cover star has proven that nabbing the breakout role at just 15 was only the beginning for her. Since then, she’s cemented herself as the face of our favorite horror and sci-fi thrillers with a role in the Fear Street trilogy; collaborated on a series of striking Chanel, Miu Miu, and Prada ensembles with stylist Molly Dickson; and even appeared in the Taylor Swift–directed short film for the artist’s “All Too Well” video. But long before Stranger Things propelled her into the spotlight, the Texas-born star was a theater kid with her focus pointed squarely at Hollywood. So now that Sink stands at the beginning of her 20s with a magnified role in the hit TV series and an upcoming feature film, there’s no question that she’s no longer the new kid in town. She’s here to stay.

This summer, Sink is returning to our screens once again as skateboarding cool kid Max Mayfield for the highly anticipated fourth season of Stranger Things, which airs as Part One (out now) and Part Two (July 1). As Kate Bush’s angst-filled anthem “Running Up That Hill” blasts through her Walkman, her character takes up a much larger share of the plotline, and each time Sink appears on-screen this season, we’re introduced to an even deeper layer of her acting chops. Portraying a darker mental landscape of her character was a new challenge for Sink. “I’m just really proud of her,” she admits.

We caught up with the 20-year-old rising star to discuss what the kids of Hawkins are up to in the new chapter of Stranger Things, her forthcoming role in Darren Aronofsky’s film adaptation of The Whale, and the ’80s fashion trends she would straight up ban. Below, read some excerpts from our interview, and tune in to the Who What Wear podcast to hear it in full.

You have five minutes to get dressed. What is the first instinct of what you’re going to throw on?

Baggy jeans, a black or white layering top of any kind, then a slouchy blazer. And a pair of boots, probably.

It’s your day off. No filming or attending press events. No plans at all. What are you getting up to?

Honestly, nothing. Literally nothing. Like I will. I will lie in bed. I will watch TV. I will take the dog outside on walks as needed. But that will be my only fresh air for the day, and I will stay inside and do nothing.

If you weren’t an actor, what would you be doing?

Probably something within the film-and-TV industry, but I don’t want to give you an industry answer. So something completely outside of film, TV, and theater? Maybe a lawyer. My brother just graduated from law school, and he worked so hard. In another life, I could see myself maybe going that route.

Seeing as Stranger Things is based in the ’80s, let’s play a little game of wear or tear. What’s one ’80s fashion trend you’d tear?

And the trend you’d wear?

A Members Only jacket. Joe Keery’s character, Steve Harrington, wears them—a lot of them. I think they’re very cool, so I would probably take after Steve and get my hands on one.

For everyday life, sneakers all the way. I’ve never voluntarily worn a heel in a casual way, at least in my own personal life. Never. On a red carpet or for any event, then, yes, I love a heel.

Pants all the way. No questions asked. I will wear a dress every once in a while, but most likely you will see me in pants.

This interview has been edited and condensed for clarity. Check out our previous episode featuring WWW editors discussing every major swim trend to know this summer.