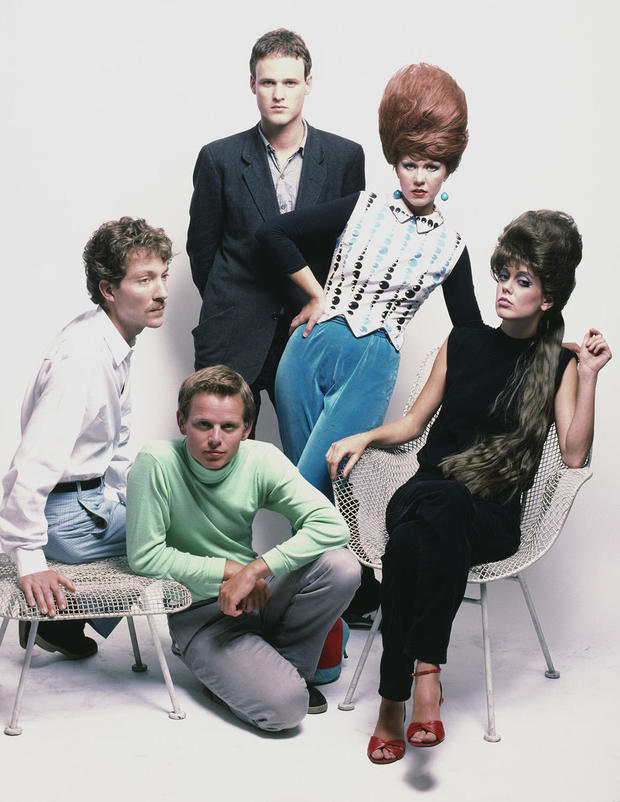 When “Love Shack” by The B-52s began playing on MTV, it was not like anything else in rotation. “Well, it didn’t fit the mold of what mainstream radio played,” said band member Fred Schneider.

But the mainstream caught on. “Love Shack,” released in the summer of 1989, became the group’s biggest hit.

“And it was different,” added Cindy Wilson.

To watch The B-52s perform “Love Shack” click on the video player below:

They could be describing their own band. Wilson, Pierson, Schneider and Keith Strickland never tried to fit in. According to Schneider, “Mainstream radio had a list: if you like, you know, The Eagles, your friends drive Mercedes. And then at the bottom, if you like the B-52s, they borrowed their friends’ cars!”

The group came together after Schneider and Pierson moved from New Jersey to Athens, Georgia, where Strickland and Wilson grew up.

Correspondent Kelefa Sanneh asked, “Was the connection instantly a musical connection between you guys?”

“No, we were friends; we’d hang out together,” Strickland replied.

Pierson added, “We never really intended to start a band!”

The next day, Strickland’s best friend, Ricky Wilson, began playing it, missing string and all.  “And he said, ‘I’ve just written the most stupid guitar riff you’ve ever heard!'” Strickland laughed.

It would become “Rock Lobster,” the band’s first song … and then, in 1979, its first single, with Ricky Wilson on guitar, Strickland on drums, Schneider as lead singer, and Pierson and Ricky’s little sister, Cindy Wilson, harmonizing.

Schneider said, “It’s a hobby that just exploded into a career. I was still washing dishes at a local restaurant.”

“And I was a waitress at the Whirligig,” said Cindy Wilson.

Looking at a 1980 portrait of the group by Lynn Goldsmith, Sanneh asked, “You can kind of see how the band got its name.”

“Yeah, ’cause the B-52s is another slang term for a big, you know, bouffant that looks like a nose cone,” Pierson said. “Keith came up with the name.”

Hailed as a “breath of fresh air,” their first album was the inspiration for John Lennon’s last. In what would be his final interview, Lennon told Rolling Stone’s Jonathan Cott, “[‘Rock Lobster’] sounds like Yoko’s music. I said to meself, ‘It’s time to get out the old ax, and wake the wife up!'”

Sanneh asked, “Were you shocked when you heard that?”

“Yeah,” Strickland replied. “We were big fans of Yoko from way back.”

Appearing on “Saturday Night Live” in 1980, the band looked and sounded like something from another planet:

Of their “SNL” appearance, said Schneider, “That’s actually what made us. We had never done TV like that.”

Kurt Cobain and Dave Grohl individually saw it. “And they said it blew their minds,” Pierson said. “We had no idea, and never set out to change people’s lives, but it happens that way.”

The five band members released three more albums. “Bouncing Off the Satellites” in 1986 would be their last. Guitarist and Cindy’s big brother, Ricky Wilson, had AIDS, at a time when many with AIDS were ostracized; he died at age 32. “I suspected, but he wasn’t ready to talk to me about it,” she said.

The story of The B-52s seemed to be over. Strickland said, “We couldn’t imagine doing it without Ricky.”

“We started losing so many friends, too,” said Schneider.

Pierson said, “It was just devastating what followed, and yet, counterpoint to that, I think a lot of people tried to find joy in music.”

Including Strickland, who’d lost his best friend and collaborator.

Sanneh asked, “You suffer this incredible setback, you lose a real visionary. And so, you figure out a way to regroup?”

“I didn’t really think of myself as a guitarist,” Strickland said. “but I had been writing songs with the guitar and keyboard.”

Strickland, Pierson, Schneider and Cindy Wilson started meeting up and writing again. “That was a really consoling thing for us to do, to be together,” said Strickland. “I mean, we would spend hours just talking, even though we were writing songs.”

The result:  “Cosmic Thing,” released in 1989. The album sounded like a celebration, and it attracted a new generation of fans, thanks to songs like “Love Shack,” “Roam,” and “Deadbeat Club.”

Strickland said, “Writing the music which became ‘Deadbeat Club,’ I was thinking about Ricky a lot, and that was one of the songs where I was imagining him sitting beside me playing.”

Pierson said, “”Cosmic Thing’ was really written to heal ourselves, but magically it healed a lot of other people who heard it. Being outsiders or gay or whatever, they felt different, and I guess our message was, it’s always, it’s okay to be different.”

Sanneh asked, “Did you ever think in those years of what Ricky would be thinking to see that kind of success?”

Strickland replied, “Yeah, I don’t know how Ricky would have responded to it. Ricky was so talented, so amazingly talented, and yet at the same time he wasn’t driven. Like, he had so many other interests.”

Since “Cosmic Thing,” the band has released only two more albums of original music.  They spend much of their time on tour playing for fans who still line up to hear the hits.

But for the past 10 years, Keith Strickland has stayed home.  “Touring with the band for more than 35 years, I just felt it was time,” he said.

This summer, Cindy Wilson, Kate Pierson and Fred Schneider are embarking on what’s being called the band’s farewell tour.

Perusing the wall of ’80s promotional photos, Sanneh asked, “What do you remember about those people in those photos?”

“I think I was still thinking about Ricky,” said Cindy Wilson.

Schneider said, “I have no skill, so I was happy to, you know, be in a band!”

And Pierson said, “All I know is, my face says we’re gonna succeed!”