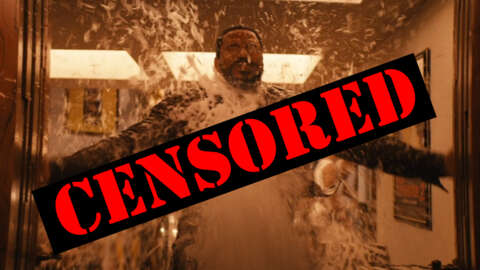 Herogasm has finally come to The Boys, and it did not disappoint. While the episode took some liberties from the source material, Episode 6 of Season 3 brought some of the wildest moments we’ve seen so far on this show. Laz Alonso, who plays Mother’s Milk on the series, along with writer and showrunner Eric Kripke discussed one particular moment where MM was doused with a viscous, milky liquid.

Warning: Spoilers from Episode 6 “Herogasm” ahead.

During one scene, a supe engaged in sexual activity gets some natural lubricant on Mother’s Milk’s jacket. Of course, MM wanted to clean off his jacket, so he looks for a bathroom. He opens a door, here’s someone yelling “throwing ropes,” and MM is doused in gallons of ejaculate.

“It was just soap, lube, water, all stuff that wouldn’t irritate the eyes or skin. They swore no DNA,” Alonso told GameSpot. “It was our last shot of the night. We literally had the background actors filming all day, and there was so much coverage to get in every inch of the mansion that when we got to the ‘rope throwing’ scene, we only had time for one take for getting it right. What you see was literally one take, shot from every possible angle.”

While being soaked with the mixture may have seemed rough, it was apparently better than filming inside the dead whale for Season 2. “Both scenes took days to shoot, but the whale episode had more challenging elements from weather, to a boat, storms and we had to be covered in blood every day,” Alonso said. “That’s two seasons that Kripke does this to me! Kripke 2 – MM 0! I am convinced Kripke stays up late at night thinking of how to humiliate poor MM with every season. He truly gets joy seeing MM get ‘sausaged’ and now “roped.” Where it ends nobody knows, we’ll see next season!”

It may seem like Kripke has it out for Alonso, but Kripke has nothing but love for the actor. “I think he’s a victim of his own success,” Kripke told GameSpot. “Because beyond being such a brilliant actor and so complicated, he happens to be like an amazing straight man. He’s a brilliantly funny straight man. We learned that when he had his Love Sausage episode in Season 2. And so the writers like the minute we see something that’s awesome, we like glom onto it. And he read it. And he was like, ‘What the f*** man? Like, what do you keep doing to me?’ And I was like, ‘You’re really a victim of your own success. It’s so funny.’ It’s one of my favorite moments of the season. It’s because of how he plays it, and it’s because of Erin’s [Moriarty, Starlight] reactions.”

However, shooting the Herogasm orgy in itself was quite the challenge, considering the COVID pandemic. “Logistically, as a producer, it’s a f***ing nightmare. It’s dozens of naked people simulating sex acts during COVID. And obviously, as you can imagine, there’s like 1000 ways that could go really wrong in terms of someone acting inappropriately. We needed multiple intimacy coordinators that make sure everyone’s behaving properly, multiple COVID officers, multiple safety officers. Because what I said is if we’re pulling this off, we have to be so locked down in terms of shooting this professionally. And that’s scary, right? There’s a lot of uncontrollable elements when you have that many people. But thankfully all the officers and various supervisors did their job. And it was a completely professional set. That was like a logistical challenge. It took about five days to shoot and I was holding my breath the whole time.”

The Boys is available to watch on Prime Video, with new episodes available every Friday. For more inside information of the show, check out our other pieces about Season 3: