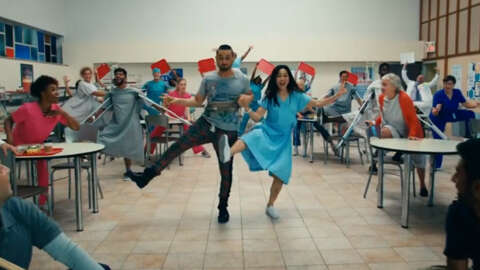 One of the highlights of Episode 5 of Season 3 of The Boys on Amazon’s Prime Video streaming service is the big musical number featuring Frenchie (Tomer Copone) and Kimiko (Karen Fukuhara)–it is certainly the most wholesome one of the season. And while this is just one scene in an episode, could there be a whole The Boys musical episode? According to showrunner Eric Kripke, that probably won’t happen.

“I’m a huge fan of musicals,” Kripke told GameSpot. “Especially like old school, Hollywood musicals. And I’d been dying to get like just a huge, classic, innocent musical number into one of my shows, probably since Supernatural, but really blow the doors off it: lots of backup dancers, huge choreography.”

And Kripke and company did that, putting a lot of work into the one song and dance number inside the hospital, which turned out to be one of the more delightful. However, a whole musical episode may be out of the question. “I would love it,” Kripke continued. “I don’t know how to justify it. You know, unless there’s some mass hallucination. The Boys is not a world that you can just like cut to a musical unless everyone’s on drugs. So, I would love to do a full musical episode if I knew how to pull it off, but I don’t know how to pull it off.”

Kripke jokingly mentioned that it might work as an episode of Diabolical, Prime Video’s animated spinoff anthology series.

However, the short scene between Kimiko and Frenchie dancing in the hospital took a ton of work, and had plenty of challenges. “There’s obviously the choreography that Karen [Fukuhara] and Tomer [Capone] have to do, but then there’s like, what is it like 50 backup dancers, who all have to fit within a hospital location, use the props and hospital gear around them,” explained Kripke. “The inventiveness of our choreographer, Amy Wright, was just amazing of how she pulled it all together, and then had to rethink it again, based on the location we found and the hallways that we had to move through and just making it fit in that space. You know, I think it was really challenging, but I thought she did such a beautiful job.”

The Boys has already been renewed for Season 4, and this season has been a wild one, introducing Jensen Ackles as the explosive Soldier Boy–one of the villains this year. One of the more wild moments this season so far was The Deep eating one of his friends, and actor Chace Crawford discussed filming it.