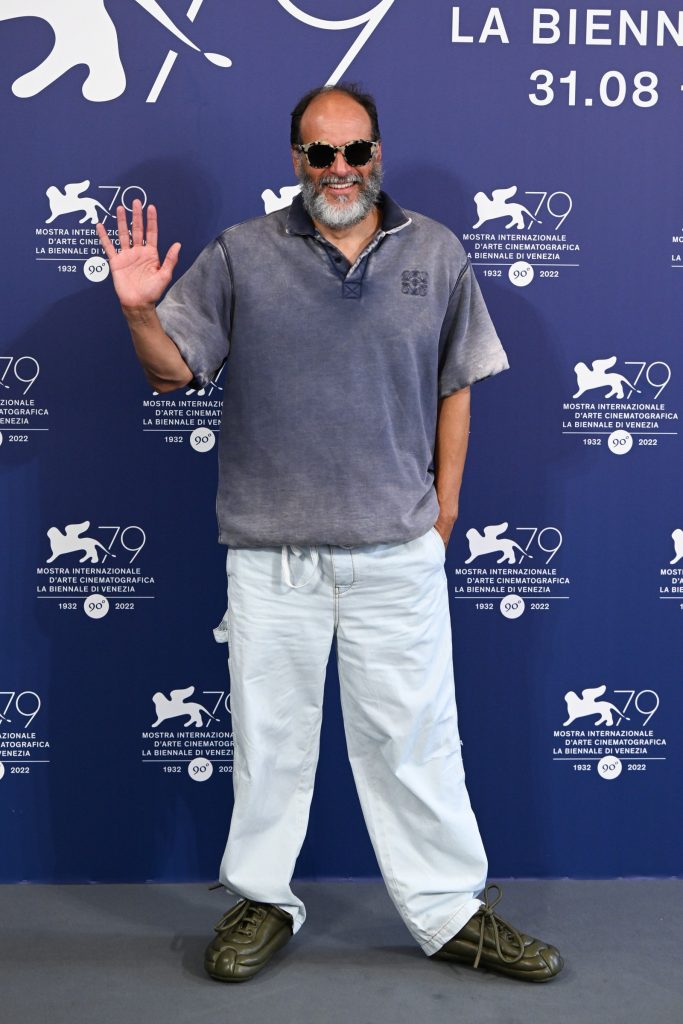 The task of standing out on a Venice Film Festival red carpet next to Timothée Chalamet in off-the-runway Celine and Taylor Russell in Balenciaga pantaleggings is nothing short of Sisyphean. But that’s exactly what director Luca Guadagnino—wearing a faded-out polo, slouchy jeans, and green Jet-Puffed-marshmallow trainers from Loewe’s spring 2023 collection—managed to pull off.

Guadagnino and company, in town to plug their new film Bones and All, are no strangers to the particular idiosyncratic fashion that the watery Italian fête tends to invite. (A day earlier, he pulled up to the Excelsior Pier wearing Thélios sunglasses and an oxford shirt printed with an image of his mentor, the Italian filmmaker Bernardo Bertolucci, which wasn’t not reminiscent of the Chalamet-printed button-down his Call Me By Your Name screenwriter James Ivory wore to the 2018 Oscars.)

And Guadagnino isn’t the only one in full-swing Director Fits mode at Venice. Noah Baumbach, promoting his movie adaptation of Don DeLillo’s White Noise, has been opting for crisp Prada chore coats and Adidas Sambas (the easygoing shoe of the summer), while his fellow filmmaker and partner Greta Gerwig, who also stars opposite Adam Driver in White Noise, has been sporting lots of Palm Springs-y Gucci.

But there are two distinct style modes at the Venice Film Festival: the black-tie premieres and the low-key photocalls. At such off-peak events, high-fashion casual wear (with heavy emphasis on whatever fashion or casual means to the wearer) is the unofficial dress code—of which Guadagnino, wearing T-shirt and jeans that also happens to be head-to-toe designer, is kind of a perfect example.

Photocall style and aspirational “post-swag” dressing, as GQ’s own Sam Hine wrote on earlier this year, is a genre all its own, as pioneered by Chalamet himself; there’s “freedom in dressing as regular as possible.” Seemingly taking a page from the post-swag playbook is Mexican director and Academy Awards titan Alejandro G. Iñárritu, who arrived at the pier in a pair of embroidered cargo pants and Rick Owens x Converse high-tops. Here’s hoping that somewhere out there is a Chalamet-Guadagnino-Iñárritu hypebeast group chat.