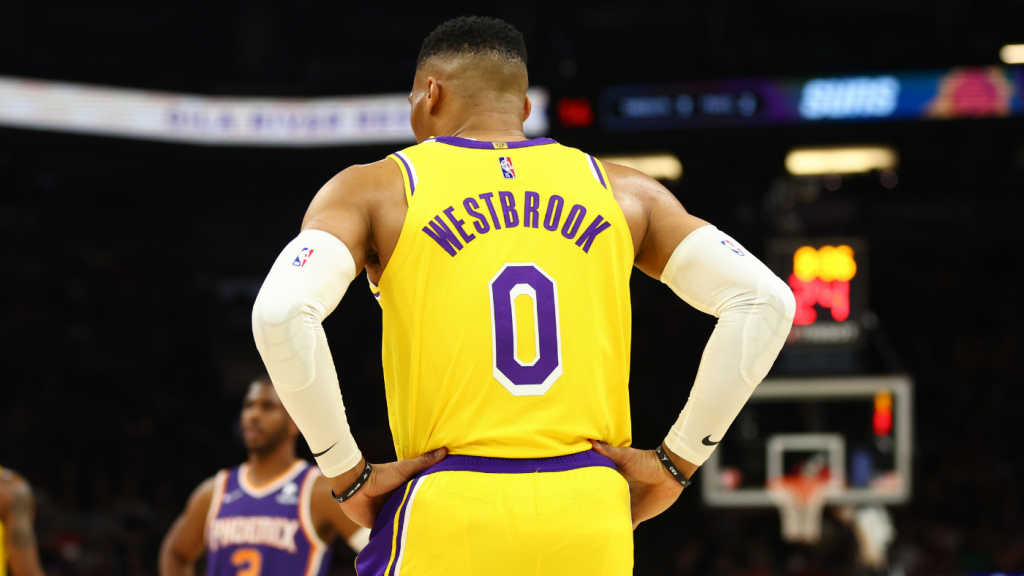 Russell Westbrook’s standing as a member of the Los Angeles Lakers seemingly changes by the day. He arrived as a third All-Star to bolster an existing champion. He quickly became a solo artist failing to keep an injury-riddled team afloat. He eventually grew into a pariah, a symbol of his team’s misplaced ambitions and the championship formula they discarded. This offseason, he was the NBA’s most obvious trade candidate.

And when this season arrived, his place in purple and gold shifted yet again. After perhaps the worst three-game stint of his career, Westbrook was demoted to bench duty. It saved his career. The underwhelming Lakers have a .500 record in the 20 games Westbrook has spent as a reserve. His playmaking and energy off of the bench have become emblematic of the team’s resilience. A 2-10 start turned into multiple winning streaks. The Lakers beat arguably the NBA’s best team on the road. Westbrook, right now, is the betting favorite to win Sixth Man of the Year.

That success has created a scenario that would have been unthinkable mere weeks ago. Some Laker fans are now actively clamoring for the team to keep Westbrook, arguing that he is too vital a piece to be replaced in the middle of the season if the Lakers hope to contend. Though their motivations likely differ, the Lakers themselves seem to be trending in the direction of keeping him. Multiple reports have suggested that their preference would be to build a deal around Patrick Beverley and Kendrick Nunn while retaining Westbrook and, more importantly, one or both of their two tradable first-round picks. According to ESPN’s Adrian Wojnarowski, the Lakers aren’t giving those up for just anything.

“I think their strategy remains the same which is, we know what their assets are — the ’27 and the ’29 first-round picks — that they’re not going to use those unless they can get back essentially an All-Star level player,” Wojnarowski said on ESPN Wednesday. He noted that the team’s recent success has bought the team a bit of time not to rush into a deal. The team, it seems, is priming fans not to expect a Westbrook trade.

We can of course note their more cynical motivations in potentially avoiding one. Keeping Westbrook and allowing his contract to expire would be a key step in avoiding the repeater tax next season. Trading him for a longer-term salary might prevent them from doing so. Even if money weren’t a concern, it is unclear how many future assets, if any, the team is willing to pour into reloading around LeBron James and Anthony Davis despite Rob Pelinka’s public promise to give up those picks. Those are likelier motivators for keeping Westbrook than a belief in his impact on this year’s team, yet it must be said, no matter how well he is playing, there simply isn’t a path into championship contention for the Lakers that involves Russell Westbrook remaining on their roster.

There are statistical and stylistic reasons for this, of course. Even during their recent 8-4 surge, the Lakers are outscoring opponents by 10.9 points per 100 possessions with Westbrook on the bench, compared to playing them roughly evenly with him on the floor. While the Lakers have found interesting workarounds to his deficiencies as a shooter, even they know playoff-caliber defensive game-planning is going to negate those tricks because they themselves rendered Westbrook helpless in the 2020 postseason simply by ignoring him. We could follow these trends down a 2,000-word rabbit hole, but there’s a much simpler explanation for why a trade is necessary. It has little to do with Westbrook the player and everything to do with Westbrook, the $47 million cap figure.

That championship formula the Lakers discarded to add him in the first place relied on shooting and defense. Shooting and defense aren’t cheap. The most salary the Lakers can bring in by offering up Beverley and Nunn as compensation is a bit less than $23 million. That’s helpful, but not overwhelmingly so. In the modern basketball economy, do you know what $23 million gets you on the shooting landscape? Eric Gordon, Buddy Hield and Tim Hardaway Jr. all come in slightly below that figure, but not enough to bring back a second meaningful player. Dip down into two-player territory and you could squeeze… Terrence Ross and Alec Burks into those salary slots.

The Lakers are not one Eric Gordon or two Terrence Ross-caliber shooters away from fixing their offense. Despite recent team-wide improvement, the only two Lakers to shoot above 37 percent from deep thus far this season are Matt Ryan, who has been waived, and Max Christie, who has shot 19 3s. They still rank 28th in 3-point attempts and 30th in 3-point percentage as a team this season. Westbrook is creating better shots of late, but most of those shots are coming at the rim. Playoff defenses are going to be more aggressive in taking those away.

The Lakers might themselves have a playoff-caliber defense. They rank 14th on that end of the floor overall, but sixth in half-court points per play allowed, according to Cleaning the Glass. That defense is largely reliant on a single player. Laker lineups without Davis rank in the 32nd percentile league-wide defensively, but just look at the last two full games he missed. They allowed 138 points to the Spurs, ranked 29th in offense, and 126 to the Raptors, ranked 13th. Remove Davis for a few minutes and the Lakers can skate by. Remove him for any meaningful stretch and their roster, devoid of secondary rim protection, collapses.

So what will another rim-protector cost? Shop in the premium aisle and you can grab Myles Turner at $18 million (which, given his impending free agency, is a short-term bargain). He satisfies the team’s desire for shooting, though succeeds there only relative to his peers at the center position. Jakob Poeltl comes in at half of the cost, but without Turner’s shooting, fundamentally alters the way that the Lakers, who have played Davis exclusively as a center, can conduct their offense.

There’s also perimeter defense to consider here. That can be found for relatively cheap, as one of the best in the business, Alex Caruso, makes less than $10 million. Of course, when teams have players like Caruso on bargain contracts, they tend not to let go of them. Denver likely isn’t eager to give away Kentavious Caldwell-Pope at $14 million either. We don’t need to keep picking at old Laker wounds, but you get the message. These players make eight figures and are fairly rare.

The Lakers don’t need to fill one of these slots. They need to fill all of them. In some cases, they might need several players. That was the formula the Lakers won a championship with in 2020: Caruso and Caldwell-Pope hounded opposing guards. Dwight Howard and JaVale McGee protected the basket alongside Davis. Everyone pitched in behind the arc. It takes a village to win a championship. Westbrook is eating up that village’s entire budget.

That was true as true six months ago as it is today. The difference is that at this point, Westbrook is providing things that would need to be replaced. The Lakers would miss his playmaking, particularly his pick-and-roll chemistry with Davis. Dennis Schroder has always struggled in that arena. Austin Reaves has improved in that regard. Schroder can match some of Westbrook’s speed. None of their guards can rebound as he does. He would be a loss.

But it would be a necessary loss because the Lakers simply cannot fill all of the needs they’d need to in order to compete for a championship with $23 million in salary flotsam. They need Westbrook’s $47 million. They frankly need to combine it with the Beverley-Nunn money to get to $70 million. This team isn’t one or two fringe players away. It needs an entire supporting cast that it does not currently have.