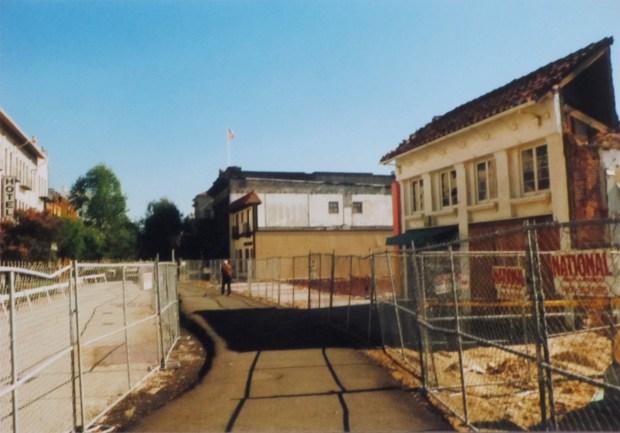 The Pacific Garden Mall was the triumph of Humanism over the Car Culture, having retained the historic qualities that design communities around people, instead of the modern movement of designing around cars.

Chuck and Esther Abbott settled in Santa Cruz in 1963 because of the historic architecture. Then in July 1964, the town clock was decapitated from atop the Odd Fellows Temple, whose building was then modernized into a box with a sheet-metal façade. The Abbotts had to convince downtown merchants who were recovering from the 1955 flood, that instead of hiding or removing historic details to make downtown look more Freeway Vernacular (as had been planned in 1960), they should highlight and restore these unique buildings as a “Downtown National Historic District.”

This goal was achieved in 1969, when the Pacific Garden Mall opened. The 1882 Octagon Building was saved as the history museum, which inspired Kermit Darrow & Roy Rydell’s design of polygon planters made of recycled brick, built along Pacific Avenue from Mission Street to Cathcart Street. These were lush with flowers, trees and sculptures, along a serpentine single lane Pacific Avenue. While some hadn’t wanted cars at all, the meandering road made it impossible to drive fast.

The magnificent 1895 Richardsonian Romanesque court house was slated to be demolished for a parking lot, but Max Walden bought it in 1970, and made it the most important downtown attraction, known as the Cooper House. It had a sidewalk café with live music, a stain glass alley art gallery, and Victorian themed restaurants, studios and specialty shops. It was as much a colorful Counter Culture mecca, as it was historic. In 1976, the old town clock was rescued from storage, and became the Clock Tower at the head of the avenue.

The Pacific Garden Mall had turned the downtown from an afterthought, to a major attraction for residents, visitors and artists. By the mid-1980s, the city debated requiring earthquake retrofits for these landmarks. Some felt the expense was unwarranted, preparing for a quake that might happen in 50 years, 100 years or never. But the Cooper House led the way by closing to reinforce its exterior walls. One hated to meddle with success, having so much to celebrate as the Garden Mall’s 20th anniversary approached. I was doing some graphics for the event, scheduled to give a history talk, with my ensemble to perform a new theme song for the mall.

I was making my way down Pacific Avenue on Oct. 17, 1989, going from store to store, getting information on how merchants and residents planned to celebrate the anniversary. It was a warm sunny day as butterflies danced in the jasmine-scented air. Little did I realize I was witnessing the last moments of the Pacific Garden Mall. I got home by 5 p.m., then at 5:04 p.m. the earthquake struck. Doors in the house slammed closed, and breaking glass and crashing sounds made me think the front of the house had fallen. I was barefoot, and there was broken glass everywhere, but on inspection, the house was intact. Outside it seemed like nobody even noticed. But when I looked toward downtown, a black cloud of smoke arose, and I feared downtown was on fire.

But it wasn’t. People downtown saw parked cars bouncing up and down like broncos, while ripples ran through the asphalt like waves on a lake. Windows exploded, and bricks fell from unreinforced buildings, producing a cloud of black dust rising from the debris. A wall fell through the roof of the Santa Cruz Coffee Roasting Company, killing Shawn McCormick and Robin Ortiz; and a wall fell through the roof of Ford’s Department Store, killing Kay Trieman. As people stood in shock after the shaking, the devastation was suddenly filled with little costumed ballerinas, evacuating a second floor dance studio.

The shaking had been stronger downtown. These river flats are an alluvial collection basin for centuries of loose soil washed down from the mountains, as well as a ground-water catchment point for the entire San Lorenzo River watershed, producing a high water table.  The geologic conditions cause soil liquefaction during an earthquake. The epicenter was only 18 miles from Santa Cruz in the Forest of Nisene Marks, giving it the name of the nearby mountain, the Loma Prieta Quake.

The Civic Auditorium was turned into a shelter for displaced citizens. Meanwhile, seven giant “Phoenix Place” tents were set up in parking lots, to house 36 displaced stores, with distinctive artwork facades to give the anonymous tenting some character. Those merchants whose buildings survived the quake, now saw their good fortune turn into bad luck. The tent businesses were doing well, but Pacific Avenue was abandoned to demolitions and debris collection, while keeping the street open through a warren of cyclone fenced pedestrian paths to the remaining stores. To remedy this neglect, art installations were created for several downtown pits, as a means of attracting the public into the old downtown. The 20th Anniversary celebration was now held in the ruins of the Pacific Garden Mall, with a banner on the clock tower: “Together We Are Working To Keep The Downtown Alive!” I performed a comic song called “The Santa Cruz Earthquake Blues,” to express what many were feeling.

FEMA was offering free demolitions, but only for a few months, which stampeded some property owners into getting demolitions rather than repairs. Some buildings with only cosmetic damage were demolished, leaving owners paying taxes on non-revenue-producing vacant lots for a decade or more. Within days of the earthquake, 18 downtown stores were slated for demolition as unsafe. The most controversial was the Cooper House, our most important landmark. Its interior had collapsed due to illegal modifications of its basement years before, but its walls had been reinforced. Five different contractors debated the building’s stability. I noted that “People will get over the earthquake, but they won’t get over the loss of the Cooper House. It has emotional resonance as a symbol of Santa Cruz.” However, under the emergency powers and lacking National Historic District status, Historic Preservation Commission had no say in its fate. On Oct. 26, 1989, we watched the wrecking ball bounce off the steel-reinforced landmark again and again, taking days to demolish.

To get a handle on reconstruction, “Vision Santa Cruz” was established Jan. 11, 1990. Called the “Gang of 36,” they were tasked with developing policy and reviewing decisions to guide the rebuilding process. They represented business groups, unions, downtown neighbors, the Arts Council, Cultural Council, County Historical Trust, and the transit district. The board was expanded to about 40 members, which showed how inclusive the city wanted to be. They hired ROMA design consultants, who conducted visioning workshops with the public about what kind of downtown they wanted. Most placed the heart of the downtown at the Cooper House, and called for retaining the village scale, and artistic charm of the historic downtown. I served on the design guidelines subcommittee, with the goal of producing compatibility standards that honored the surviving landmarks.

While developers kept complaining they wanted projects fast-tracked, when given a choice, they kept choosing a slower track. We were creating new community guidelines for non-historic buildings. Those who complained there was a vagrant behind every tree, chose the slow track planning process for a new streetscape, while demolishing the old one. Old buildings were owned free-and-clear, and once repaired, could produce affordable leases. But new construction produced expensive leases, and developers sat on approved plans for a long time trying to find enough tenants so they could afford to begin construction.

Los Gatos had buildings of similar age and quake damage, and during a tour for Historic Preservation Commission, we learned Los Gatos had chosen the “Three R’s of Recovery: Restore, Retrofit and Reopen.” And while some buildings had to be torn down, their priority was “save everything that could be saved.” Los Gatos was back in business in about six months, while ROMA noted, Santa Cruz had chosen the 10 year recovery path. Yet in the end, an unprecedented amount of community outreach generated guidelines that retained the village character of our downtown.

Yet given this history, many are disappointed when new state law invalidates local aesthetic guidelines when building massive new housing projects. A community defined aesthetic character seems the least any project can give a town. It helps bring people on board, at one level at least, while non-village architecture seems to be a message that wider support is not needed.