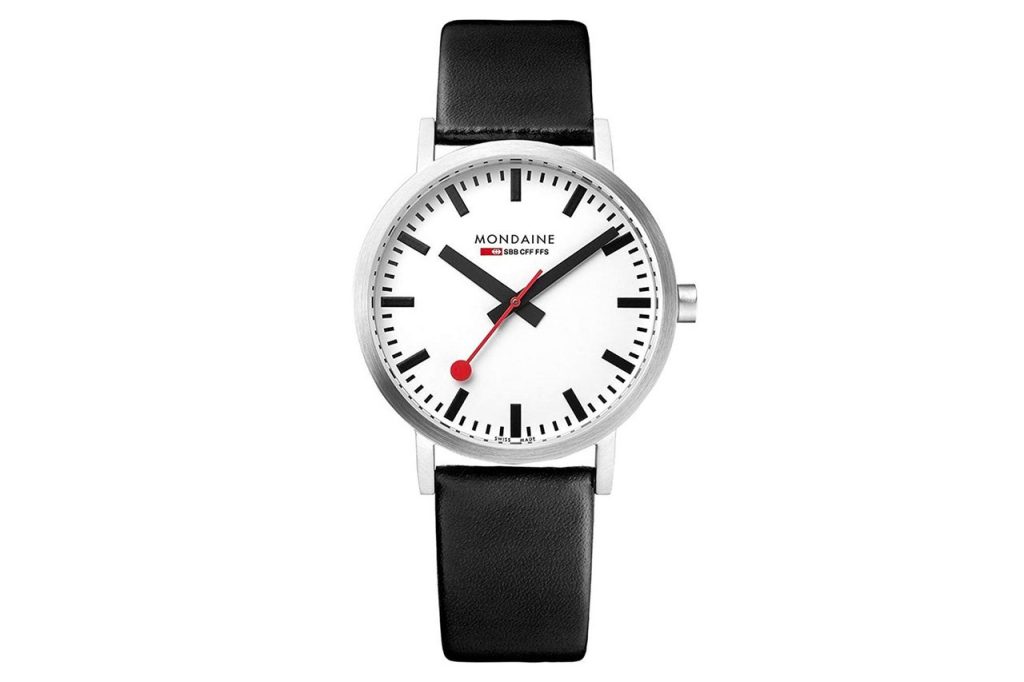 Midcentury modern design, like natural wine and vintage Porsches, is one of those things that people tend to go all-in on. It starts innocently enough with a Hans Wegner chair or a George Nelson coat rack, and all of a sudden you’re shopping for Dieter Rams shelving units on 1stDibs and sign up for an annual membership to the Noguchi museum. Watches are very much the same kind of obsession, and what starts with a $500 Seiko desk diver can quickly devolve into the realm of exotic complications from brands with hard-to-pronounce names and five-figure prices. Fortunately, just as there are plenty of affordable 20th century design grails out there, there are also more than a few examples of watches with beautiful design that don’t cost half a year’s salary. The Mondaine Swiss Railway watch, it turns out, is both.

In addition to crafting the world’s most-coveted watches, Switzerland is also known for having one of Europe’s best railway systems, with 90% of its trains arriving and departing on time (which, to anyone who rides Amtrak regularly, might seem like science fiction). In the 1940s, the Swiss Federal Railway (or SBB) commissioned engineer Hans Hilfiker to create a new design for a clock. The result was heavily influenced by the form-follows-function credo of the Bauhaus—the German design school attended by modernist titans like Marcel Breuer and Mies van der Rohe—and its contrasting white face and blocky black features made it as stylish as it was easy to read.

In the 1950s, Hilfiker updated the design with a crucial finishing touch: a big red seconds hand modeled after the batons used by the SBB’s train signalers—and 75 years later, the design remains unchanged. Nowadays, Hilfiker’s clocks can now be found at every railway station from Appenzell to Zurich, in London’s Design Museum and NYC’s MoMA, and on countless stylish wrists worldwide.

The Swiss railway clock made its debut in watch form in the mid-1980s, when Swiss watchmaker Mondaine licensed the design and transplanted it to a simple 36mm steel case. Over the next 40 years or so, Mondaine expanded its lineup to include dozens of creative-yet-faithful riffs on the original design in multiple sizes and colors, with quartz and automatic movements, and a wide range of strap options from Milanese mesh to vegan leather. For purists, however, nothing beats the original three-hand model on a simple black leather band, all the better to emphasize the clean lines of that iconic dial. At under $200, it’s remarkably affordable for a 20th-century design icon, but beware: as with funky wine and vintage Porsches, it’s a slippery slope from here.