Fans of Electronic Arts racing series Need for Speed might not have to wait long for the next game because new leaked images show its upcoming game hit the internet, and y’all it’s looking anime AF.

Today, members of the r/NeedForSpeed subreddit spotted leaked images of the new Need for Speed Unbound on the Japanese retailer site, Neowing. According to a Google translation of Neowing’s listing of the game, NfS Unbound will only be playable on next-gen consoles, and specifically the PlayStation 5. The Neowing images are tiny, but fans have since found larger versions, which you can view here.

NfS Unbound is still being developed by Criterion Games. Back in 2019, the British video game developer, famed for its excellent racers, wrote in a blog post that it would be pivoting toward developing the next NfS game after working on Need for Speed Heat. Safe to say that game is NfS Unbound.

In addition to Heat’s developers returning, the new NfS is also sporting a fresh new coat of cel-shading and 3D anime characters, a contrast to the traditionally Western look of previous games. The official NfS Twitter account just ended its year-long post drought by teasing that an NfS 2022 video reveal is coming tomorrow morning, October 6, so we’ll likely see the game in action in less than 17 hours. 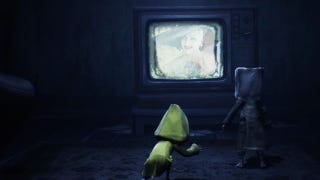 Horror Video Games to Play Leading Up to Halloween

Spooky and scary
Something video games have over their film counterparts when it comes to horror is the player’s agency. Sure, watching the slasher claim their next victim can get a jumpscare out of you, but you know what’s scarier? Knowing you had the power to stop it. Watching someone slowly open a door and enter a dark room is unnerving, but having to do it yourself will send shivers down your spine and paralyze you with fear.

Perusing the rest of the Google-translated storefront reveals that NfS Unbound will be leaning heavily into graffiti art and hip-hop aesthetics with its car designs and music with rapper (and Rihanna’s baby daddy) A$AP Rocky working on the soundtrack alongside French producer Brodinski. Gameplay-wise, NfS Unbound will feature meetups in which you can flaunt your customizable car’s gear, which is always fun.

Although the leaks of a new NfS served as a generous spritz of WD-40 on the headlights of its fanbase, one virtual motorhead was quick to remind their fellow gamer to not give into temptation and preorder NfS Unbound. Good advice, all things considered.

The last time we got a new NfS game was way back in the before-times of 2019 with Need f Speed Heat, which went down in history as the first EA game to have cross-play. In our coverage of the game, we said Need f Speed Heat evoked big Grand Theft Auto: Vice City vibes with its stylish cityscapes and complimented it for its cross-play feature, which allowed for players on PlayStation 4, Xbox One, and PC to share in the same fun.