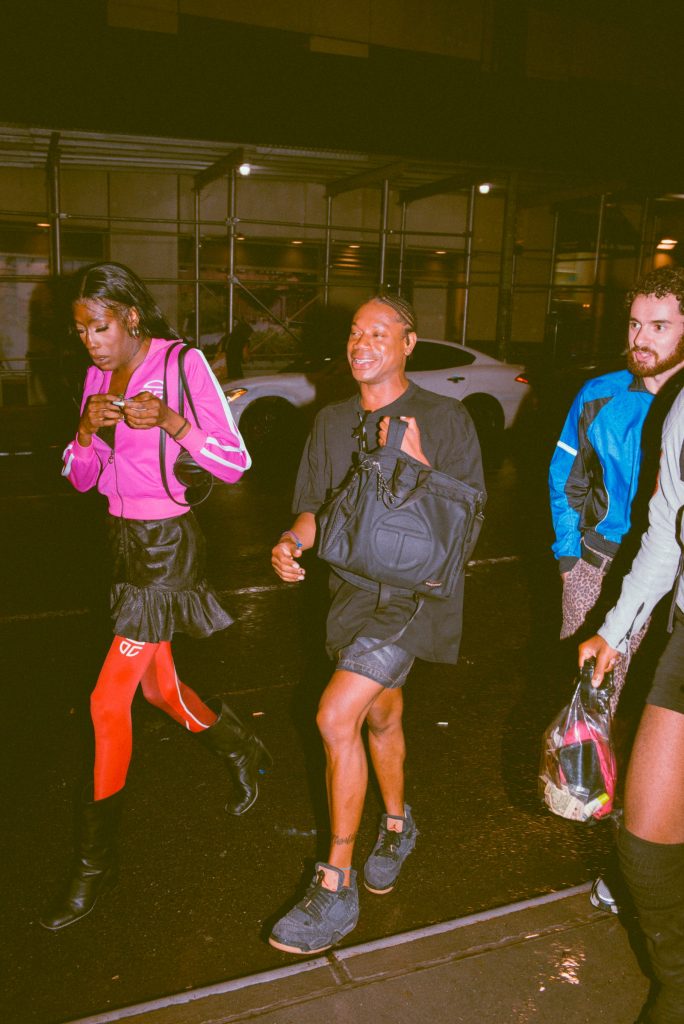 Last night, Luar’s New York Fashion Week-headlining show started late for the best reason a designer could ask for: throngs of people, more than even a high-capacity venue like The Shed can handle, had arrived, and they were ready to party. The word “community” is thrown around a lot in fashion press releases these days, but Luar founder Raul Lopez has one of the most legitimate claims to an actual hardcore community of friends and fans in the industry. Many members of the Luar squad—fellow designers like Martine Rose and musicians like Ian Isiah— are recognizable front row faces you’ll see at other shows. But plenty are just kids with great outfits and the wherewithal to score an invite, or at least a screenshot of someone else’s invite, to a couple shows a season.

Luar is an obvious destination. Lopez co-founded Hood By Air, and HBA shows were notorious for more closely resembling drag pageants or underground raves than processional runway affairs. As Lopez told me at a preview before the show, he’s kept the energy going at Luar: “I grew up where, when you did a show, you had to do a show, you had to shut it down. I come from ballroom. So I’m like, You need to bring it.”

When the show finally got underway, it became clear the swelling line outside was more than warranted: Lopez is making some of the best clothing of his career. A boxy double-breasted croc-effect blazer was a scorching start to a run of red hot men’s looks. A pleated jean skirt over a boxy sweater was Lopez’s fluid twist on the outfits his uncles wore to the family potlucks he grew up attending in Dominican Brooklyn. A rounded, stuffed shoulder on a plaid suit jacket and a destined-for-indie-mag-editorial-stardom oversized white dress shirt were conceptual nods to the weight Lopez had on his shoulders growing up as a gay kid in a community where presentation was everything. (“Latina Elizabeth Taylor” was a guiding theme for the slit-leg, clubs-ready gowns accessorized by oversized church glasses.)

Lopez has also learned a few lessons from the viral success of his “Ana bag,” which dozens of guests clutched in the crowd. People—lots of them—want to incorporate Luar into their daily lives. So Lopez is introducing a dedicated denim program. He takes it seriously: the process started with a staggering amount of R&D—think 10 rounds of millimeter-level tweaks—and resulted in the perfect kicky flared-leg jean. By the time those jeans hit the runway, the house had already been brought down, and when Lopez did his victory lap he was mobbed in a spontaneous group hug by a dozen or so friends in the front row.

The Luar show reminded me that standout fashion shows in New York are the ones attended by people who only go to maybe one or two shows a year—the ones that attract their own crews. Sandy Liang has built a loyal following that extends out from her home base in Chinatown. Liang is best known—especially in menswear circles—for her funky fleece jackets, but her Sunday morning show, in a Pace University auditorium, was an extended dissertation on the school uniform, shrunken and midriff-baring for the Miu Miu set. There were no fleeces in the collection, but look number three was a beefy khaki track jacket with matching oversized trousers: a winner for anyone who wants to study Liang’s super tasteful vision.

Over at the National Arts Club, Puppets & Puppets designer Carly Mark had nightlife on her mind. The last week has been rammed with so many parties—Sunday night alone included Luar, Highsnobiety, Frame x The Ritz Paris, Chrome Hearts, and Barragan—that instead of the weather, the topic most members or the press are complaining about is how tired and/or hungover they are. “I feel like NY is really alive right now, people want to go out, everybody’s feeling really sexy and they want to connect, and everyone’s been kind of naughty,” Mark told me after unveiling a thrilling collection inspired by Eyes Wide Shut, the artist Gustave Doré, and, naturally, partying. There was a Nicole Kidman camisole and a leather coat emblazoned with fleshy tones that felt vaguely naughty. And a simple white zip-up cardigan with the brand’s logo knit around the sleeves thrown over an evening dress. “I want to make things you can go out in, things you can feel sexy in, things you can feel confident in, and things that feel really New York,” she said. Mark is another artist-designer who is deeply tapped into the downtown scene and would find an eager customer if she decided to launch a dedicated menswear line. (I’ll be first in line for that cardigan.) Many guys already wear her Puppets-branded sweaters, and plenty of dudes arrived in the light drizzle as guests-of-guests.