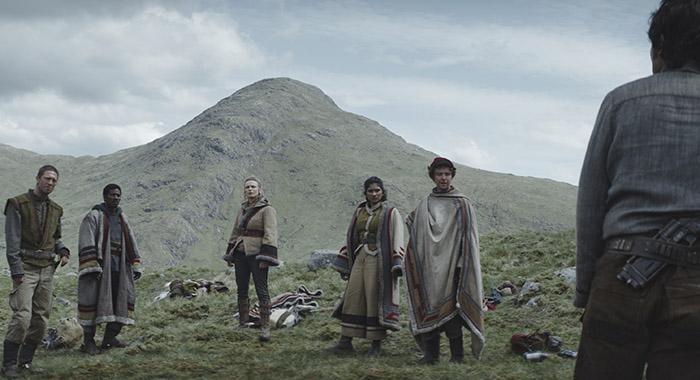 Andor’s sixth episode, “The Eye,” not only brings the series to the halfway point of its first season, but concludes its second story arc: the payroll raid. And though the hour was devoted to executing a plan two episodes in the planning, the second segment of the overall story reveals several things about the state of the Galaxy and Cassian’s (Diego Luna) role in the coming rebellion. Of course, no robbery goes smoothly in film or television — not even in Star Wars — so let’s take a look at the operation, its toll, and the edge between convictions and “enlightened” self-interest.

Spoiler alert: The following reveals details about episode 6 of Disney+ series Andor. If you have not watched the episodes and want to avoid spoilers, stop reading here.

Cassian’s escape from Ferrix came with a key string attached. He had to join had to join a Rebel operation spearheaded by Vel Sartha (Faye Marsay) on Aldhani. Her team consisted of Cinta Kaz (Varada Sethu), ex-stormtrooper Taramyn Barcona (Gershwyn Eustace Jr), enthusiastic true believer Karis Nemik (Alex Lawther), and the questionable Arvel Skeen (Ebon Moss-Bachrach). From the get-go, it was clear not all of these characters would survive the plan to heist an Imperial payroll, which is still paid out in physical credit chips, but beyond the peril of the mission is an interesting philosophical debate outlined by both Nemik and Skeen.

Early on, the group told Cassian the Imperial troops are motivated by money while they believe by a cause — the latter being a stronger reason to fight. The notion was even a chapter in Nemik’s ever-evolving manifesto (the first clue to his fate). It also formed the basis of Skeen’s doubts in Cassian throughout the first two episodes of the story. He was initially convinced the new recruit wan an Imp spy, and then discovered the Sky Khyber crystal Luthen Rael (Stellan Skarsgård) loaned him as a down payment, forcing Cassian — or “Clem,” as he decided to go by — to admit he was, essentially, a gun for hire. 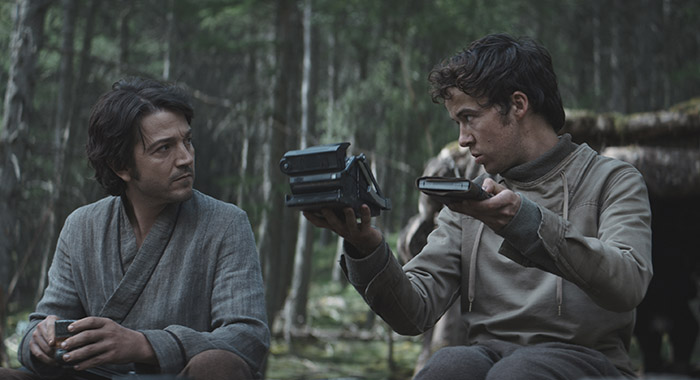 This, in turn, led Nemik to consider the role of mercenaries in the Rebellion and tacitly admit hired muscle is as necessary to the cause as it is to the Empire’s grip on the Galaxy. Although, Nemik didn’t really have all that much time to delve into what that really means.

Sadly, he was crushed by a pallet of credits while the team escaped from the Aldhani outpost. But his fate was a given; the young, enthusiastic member of the team never makes it out alive. What is more surprising is the number of people who made it out. Citra escaped the outpost with seemingly no issue (although we have to wonder if she killed the commandant’s family) while both Skeen and Vel departed the planet with Cassian. Taramyn, alas, did not survive the raid. It fit an unfortunate trope to an extent, but is complicated by the fact he was also a stormtrooper. Once again, Nemik’s thought about belief versus monetary motivation on display.

Also, Lt. Gorn (Sule Rimi) appeared to not only survive, but evade culpability as the handful of Imperials who knew his involvement in the raid are dead. Of course, one imagines he will face an intense grilling from the Imperial Security Bureau next episode.

And, seemingly, Skeen disproved Nemik’s point in the end. Despite a good story about wanting revenge against the Empire, he really was just in it for the money and his true suspicions about Cassian revolved around the seeming interloper’s ambitions toward the payroll. Offering to split the money with Cassian was the ultimate truth, at least for Skeen, and revealed something new about the title character. 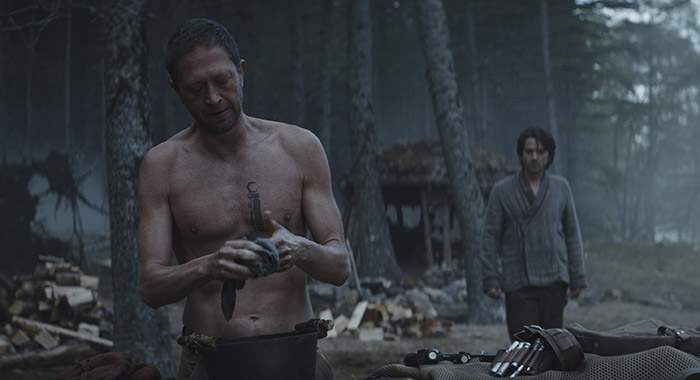 As we mentioned a few weeks ago, Cassian murdering the two Preox-Morlana security officers appeared to strike him hard, almost as though they were the first people he ever killed. The flashbacks to Kassa (Antonio Viña) avoiding his own reflection and his story to Rael about serving in a conflict earlier in his life seem to disprove that, but we will still operate from the standpoint that those murders are meant to bookend with the callous way he offs his informant at the beginning of Rogue One: A Star Wars Story. If that is the case, then his reflex in shooting Skeen dead after he offered to split the payroll is the pivot we’ve been expecting since the incident on Morlana One. At some point, Cassian had to become empowered to be ruthless and this may that moment.

But then his next instinct was to run again. This is a curious trait for a Star Wars protagonist, and we wonder if this will continue to be the case until he agrees to go to Scarif with Jyn Erso (Felicity Jones). At the same time, his devotion to the Rebellion has to come from somewhere and an obvious possibility is Nemik’s manifesto. Seemingly the truest of believers — Vel even mentions he was the entire reason the team was on Aldhani — the full text of his manifesto may sway Cassian in a way the boy could not while he lived.

Of course, that leaves Cassian in the wind with six more episodes (at least) to decide his allegiance. Where can he go in the interim? Will he attempt to go home only to find it is now under a direct Imperial boot because of his actions? Will he end up in a familiar hive of scum and villainy? Or will he head straight to Coruscant believing the ISB would never think to look for him there? Considering we’ve yet to see Saw Gerrera (Forest Whitaker), his more extreme Rebel cell may also be a possibility.

And while we’re asking questions, is Cassian even cognizant of the people looking for him? 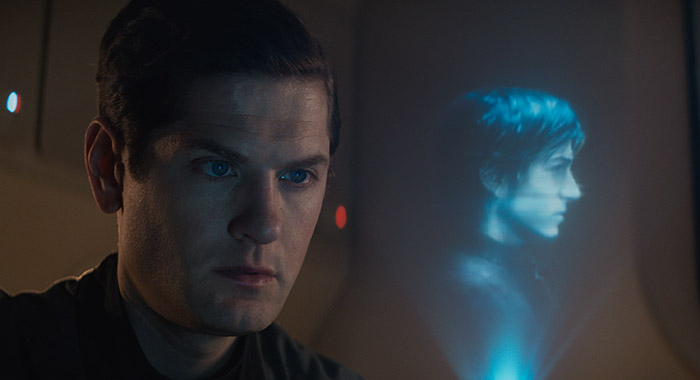 Nemik’s devotion to the nascent Rebellion is a sharp contrast to Syril Karn’s (Kyle Soller) seeming belief in the Empire’s stated desire for order. From the first three episodes, we assumed he was a true fascist. But his subsequent appearances in episodes 4 and 5 indicate accepting a job in the Preox-Morlana Corporate Zone was as much an escape as anything else. Fussed over by an overbearing mother (another of the show’s unfortunate tropes) who also appears to be under the influence of a family patriarch — the unseen Uncle Harlo — Karn sought purpose and prestige in the ranks of the Empire’s “first line of defense.” And Cassian ruined it.

Not that his expulsion from the ranks will stop him from chasing Cassian. Which may lead him back to Imperial service if he or Uncle Harlo can get him an audience with someone from the ISB. He has to suspect Cassian’s involvement in the raid that’s all over the news, right?

That first leads to a question about Uncle Harlo. One Star Wars dimension absent from the series so far is organized crime. Much like the close ties between business and fascism, syndicates, protection rackets, and mobsters are inevitable in the socio-political makeup of the Star Wars galaxy. Indeed, we know certain syndicates, like the Hutts, operate across thousands of years. Is it possible Uncle Harlo is one such mobster? It would explain why Karn’s mother not only goes to him for counsel, but suggests he would have a job for her unemployed son. It also means “Uncle” may just be an honorific, like “godfather,” and not a true marker of a blood relationship.

Should this prove to be the case, will Karn’s devotion turn out to be for sale or will it just be another step in his quest to get Cassian? 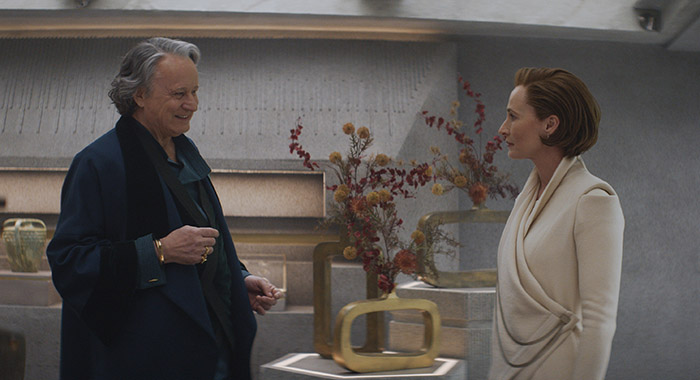 While his loyalties are now cast in doubt, one true believer we can rely on is Luthen Rael. Despite turning out to be something of a chameleon — insurgent in other sectors of the Galaxy and an art-dealer on Coruscant — his motivation seems true. So far, we’ve seen him act as a go-between for Vel’s group and Mon Mothma (Genevieve O’Reilly). We’ve also seen him use his art-dealer persona to expertly evade detection from unfriendly eyes. And the doubts we’ve seen him express so far relate to how much of himself he gave to Cassian in order to get him onboard the Aldhani operation.

Oh, and we’ve seen him express absolute joy in the Rebellion finally starting thanks to the raid.

But his actions leave a number of questions behind that we hope will be answered before his inevitable downfall. Is his devotion to the cause purely philosophical or, like Citra, motivated by some direct experience of Imperial oppression? Has he been a part of this since Mon Mothma and a few other senators met to discuss their opposition to Sheev Palpatine’s (Ian McDiarmid) reorganization of the Old Republic into the Empire? Or, potentially, was he a Separatist with no other options but to get chummy with a Republic senator?

The Razor’s Edge for Mon Mothma 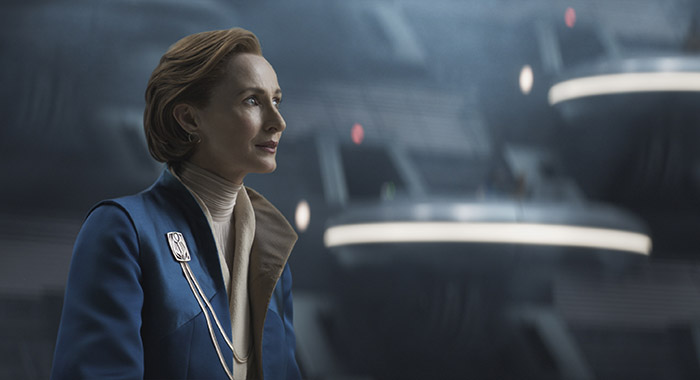 Speaking of Senator Mon Mothma, the few glimpses we’ve seen into her personal life speaks volumes about the razor’s edge she lives upon. Despite being one of the first Rebels — if we accept the Star Wars: Episode III — Revenge of the Sith deleted scene featuring O’Reilly as canon — it is a passion she cannot share with her husband, Perrin Fertha (Alastair MacKenzie), or their daughter, Leida (Bronte Carmichael). Both members of Mon Mothma’s family seem to revel in the luxury Imperial rule affords them. They enjoy parties and lives of relative leisure. And although everyone deserves some fun, Perrin’s stated devotion to it leaves Mon Mothma isolated. It also doesn’t help that he also enjoys the company of her political adversaries.

When we spoke to O’Reilly at Star Wars Celebration last May, she mentioned the tightrope and sense of constant surveillance — both marked by the appearance of her new driver in episode 4 — but to lack the support of family is something we did not expect and makes her dedication all the more incredible. It would be so easy to accept the comforts as they exist, but from her scene in the senate chamber, we know her belief in equality is in her bones and she could not live any other way.

We also know she will eventually abandon Coruscant for a life with the Alliance — possibly sooner than later. Will the rest of her family remain on the planet? And what will become of them once the Emperor disbands the senate in five years’ time?

On an Apple device? Follow Rotten Tomatoes on Apple News.