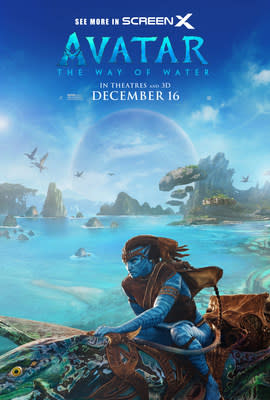 Tickets are on Sale Now

HOLLYWOOD, Calif., Dec. 6, 2022 /PRNewswire/ — CJ 4DPLEX, the world’s leading producer of premium film formats and cinema technologies, announced today that 20th Century Studios, Lightstorm Entertainment and James Cameron’s highly-anticipated “Avatar: The Way Of Water” will debut in both the visually immersive, 270-degree panoramic ScreenX theaters and the multi-sensory 4DX theaters on December 16, 2022. Set more than a decade after the events of the first film, “Avatar: The Way of Water,” paired with CJ 4DPLEX’s cinematic formats, is guaranteed to be the most immersive viewing experience for the sci-fi adventure.

For the first-time ever, audiences will be able to witness the lush lands of Pandora in the visually immersive, 270-degree panoramic viewing experience with exclusive story-enhancing imagery only available in ScreenX. CJ 4DPLEX worked closely with 20th Century Studios, James Cameron and Lightstorm Entertainment to ensure the highest quality presentation of the exhilarating journey. “Avatar: The Way of Water” will be available on over 349 ScreenX screens worldwide.

4DX submerges audiences into the action of the film by utilizing over 21 unique motion and environmental effects. It transcends the traditional movie-going experience with special effects like vibration, water, wind, snow, lightning, and scents, among others. “Avatar: The Way of Water” will be on over 783 4DX screens worldwide.

“Thirteen years ago, ‘Avatar’ catapulted the industry into the future and ‘Avatar: The Way of Water’ is sure to continue that tradition,” said Don Savant, CEO & President, CJ 4DPLEX America. “Thank you 20th Century Studios, James Cameron and Lightstorm Entertainment for your close collaboration and the opportunity to share the breathtaking world of Pandora in ScreenX and 4DX.”

“Avatar: The Way of Water” tickets are on sale now and can be purchased at your local ScreenX and 4DX theaters.

About Avatar: The Way of Water

Set more than a decade after the events of the first film, “Avatar: The Way of Water” begins to tell the story of the Sully family (Jake, Neytiri and their kids), the trouble that follows them, the lengths they go to keep each other safe, the battles they fight to stay alive and the tragedies they endure.

CJ 4DPLEX is a leading, next-generation cinema technology company, headquartered in Seoul with international offices in Los Angeles and Beijing. The company has created innovative film technologies for theaters worldwide that include ‘ScreenX’, ‘4DX’, and ‘4DX Screen’ for consumers to experience films in ways that were never before possible.

CJ 4DPLEX is a part of the CJ Group conglomerate that also includes entertainment powerhouses CJ CGV, the fifth largest theater chain in the world, and CJ ENM (CJ Entertainment & Media), who produced the Academy Award®, Golden Globe® and SAG Awards winning film, “Parasite”. CJ 4DPLEX was named Most Innovative Company of 2017 and 2019 in Live Events by Fast Company, and the technology has been recognized with Silver at the Edison Awards in the Media and Visual Communications-Entertainment category in 2015 and 2018.

ScreenX is the world’s first multi-projection cinema with an immersive 270 degree field of view. By expanding the image beyond the frame and onto the walls of the theatre, ScreenX places the audience directly at the center of the story, creating a visually immersive viewing experience unlike any other. To date, there are over 349 ScreenX auditoriums around the world in 38 countries.

4DX provides moviegoers with a multi-sensory cinema-going experience, allowing audiences to connect with movies through motion, vibration, water, wind, snow, lightning, scents, and other special effects that enhance the visuals on-screen. Each 4DX auditorium incorporates motion-based seating synchronized with more than 21 different effects and optimized by a team of skilled editors. To date, there are over 783 4DX auditoriums around the world, spanning over 69 countries.

4DXScreen is a powerful combination of our super premium immersive theatre technologies of ScreenX and 4DX in one auditorium, creating a never-before-seen experience for cinemagoers. To date, there are 42 4DXScreens installed around the globe.