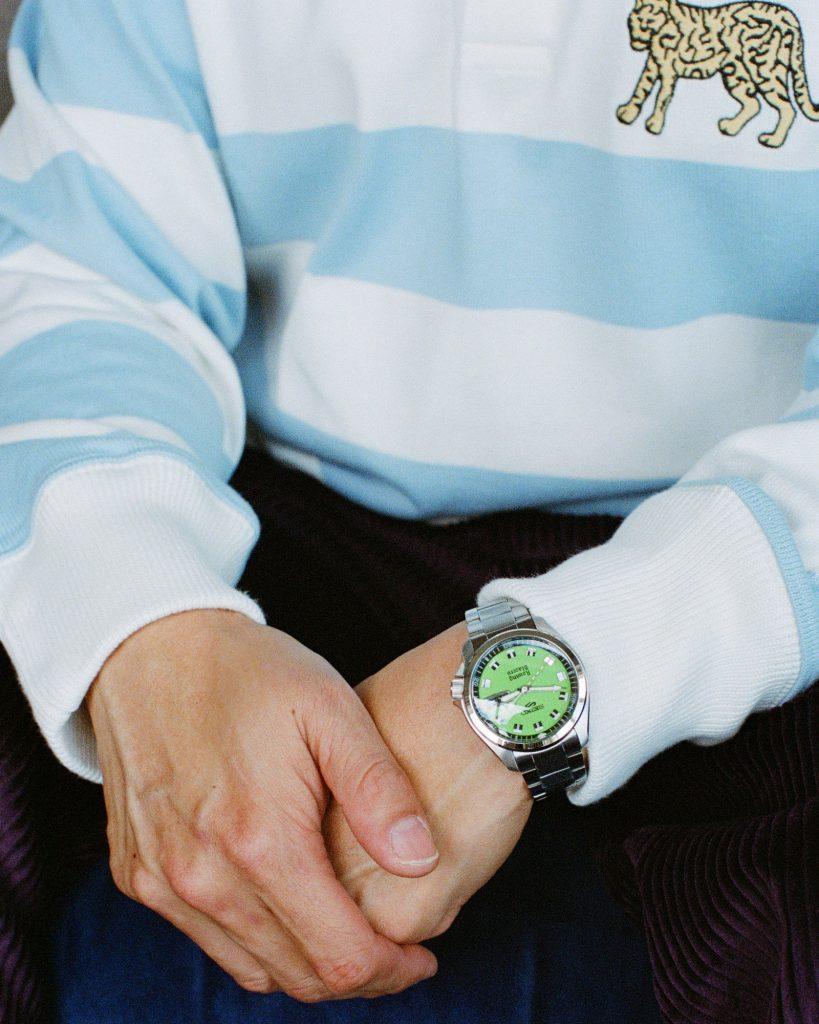 Before the launch of last year’s collaboration with Seiko, Rowing Blazers founder Jack Carlson was “freaking out,” he told me recently. “Rowing Blazers is a small business. We’re a small brand.” And though he’d long sold vintage watches through RB’s website as one-offs, he suddenly found himself with 1,500 pieces with multicolored and checkered designs. “I was like, ‘What are we going to do with these watches?’” Plus, there was an even greater worry than simply not selling watches:. “I also just know the watch community can be fairly”—he paused to find a democratic phrasing—“harsh in its judgments.” But then something surprising happened upon the watches’ release: the praise was near universal and in mere minutes every piece was sold. Some went to famous actors; others to former NBA players who don’t need to stick to budget-friendly Seikos. Now, Rowing Blazers is back with a second and equally fun collaboration with the Japanese brand—and this time, RB shouldn’t be quite so worried about whether or not they’ll sell.

This latest batch doesn’t deviate far from the formula that made the first set such a success. While the last trio played with vintage designs, these watches go all in on color. Carlson started with an orange-dial piece—inspired by a beloved ‘70s era Seiko he’s owned for years—before incorporating bright shades from around the color wheel. In addition to the orange, there are watches with a lime-green and sky blue dial. “It’s really important that everybody understands it’s not Tiffany blue,” Carlson says. The outlier comes in black—but still gets vibrant hour markers. In total, RB designed eight of these colorful watches, but set four aside for another capsule due out next year. (Carlson liked this quartet’s combination of black, orange, blue, and green because it reminded him of a New York Mets pennant he hung in his room when he was younger.) Each will retail for $495 and are limited to 888 pieces. They’ll go on sale at Rowing Blazers’ shop and website on Friday, October 28th at 11am EST.

While the watches’ cheery faces will hog the spotlight here, the supporting details are worth lingering on. Note the second hand’s candy-cane stripe design, and the syringe-style hour hand. Carlson and Eric Wind, of Wind Vintage, who helped design the watches, also pushed hard to have the days in the date window written out in both English and Japanese (as opposed to English and Spanish, which is typically an ironclad rule for the U.S. market).

2022 was already the year of the great more-affordable timepiece and that was before these new pieces joined the party. The headliner, of course, remains is the Omega and Swatch collaboration that remade the classic Speedmaster in almost a dozen playful shades priced at only $260. But the supporting acts have been just as excellent: a pair of creamy-colored watches from Bait x Unimatic, Adsum and Timex’s simple-is-best ticker, and now this RB x Seiko watch. As millions of people have taken up watch collecting over the past couple of years, brands are rushing to meet them with approachable pieces.