It’s no secret that millions of people have been dealing with huge amounts of stress recently. From global crises, to the more mundane strains of work and family life, millions are burning out, leading to deteriorating mental and physical health. It’s with this in mind that people have begun seeking natural and effective ways to counteract their body’s stress responses, including turning to wearable technology.

Many wearable devices have been shown to help with stress. These are pieces of wearable technology that use sensors to monitor biometrics like heart rate, and even can make interventions to promote better health. One similar tool —that has been proven to work in scientific studies— is the Apollo™ wearable. However, rather than passively tracking your biometrics, it actively improves your health and wellbeing.

A finalist in the World Changing Ideas Awards of 2021, the Apollo wearable is a watch-sized  stress relief device that delivers soothing vibrations to your nervous system, harnessing the power of touch therapy. Developed by neuroscientists and physicians, Apollo helps you recover from stress more quickly, so you can sleep better, relax, and focus.

Because of its ability to reduce stress and promote feelings of safety, the Apollo wearable has also been a helpful addition for patients undergoing psychedelic-assisted therapy. In fact, Apollo Neuro is the only wearable technology with an issued patent to reduce unpleasant and undesired experiences associated with medicine assisted psychotherapy —including psychedelics and traditional medicine. One could easily imagine how such a technology could be used to help induce a “good trip”, and avoid bad ones.

This is no surprise, as the founder of Apollo, Dr. Dave Rabin, is a trained psychedelic therapist who organized studies for MAPS, the largest group studying psychedelic research for mass mental health. In fact, Apollo Neuro is running a clinical trial in conjunction with MAPS to understand the long-term effectiveness of the Apollo wearable in PTSD patients who have undergone MDMA psychotherapy.

But even without combining its use with psychedelics, some have compared the positive effects of the Apollo wearable to microdosing. For example, Paul Austin, founder of Third Wave, said that “I find Apollo can be like a microdose on your wrist, a wearable psychedelic. You do not go on a journey or see visions, of course, but you drop into your body and the present moment. The vibrations remind me to be here, now.”

To explain how the Apollo wearable works, we first must understand the science behind it.

Stress is an evolutionary necessity that our ancestors relied on. When a person feels stress, the brain releases chemicals such as cortisol, which makes our breathing shallow and fast, and sends our hearts racing. In short, it activates what is commonly known as the fight-or-flight response. Obviously, this was very useful when stress was caused by a pack of hungry hyenas. It is somewhat less useful when the cause is an unopened email from your boss, or a toddler who won’t stop shrieking “MOM!” in the supermarket.

When you are chronically stressed, it’s physiologically harder to focus, relax, sleep, exercise, or even get through the day. Modern life keeps sending signals to your body that you’re under threat, but the hungry carnivore is nowhere to be found.

The Apollo wearable was designed to counteract the body’s fight-or-flight stress response by simulating the feeling of a comforting touch. Evolutionarily speaking, touch is the most important way that mammals communicate safety to one another. Think about your own life. When you’re stressed, what helps more: a loved one saying everything will be alright, or them silently holding you? Of course, it is the latter. Perhaps you can feel the rhythmic beating of their heart, telling you that you’re safe.

Moving to frequencies and vibrations, the first thing to understand is that your body’s systems already operate in certain frequencies. Your heart rate, pulse, and breathing frequencies will vary depending on your mood. For example, when you’re about to fall asleep, these frequencies are slow moving and gentle. When you are competing in a sport, they’re rapid and strong.

By understanding our body’s internal frequencies, the Apollo wearable can, through vibrations, help induce a particular state. When your body is exposed to a vibrational frequency, it will naturally sync with it. Therefore, the premise behind the Apollo wearable is that it vibrates at the frequency of a desired state, be that a relaxed one or a hyper-focused one. Then, your body will naturally sync to that frequency, causing you to feel the intended effects whenever you need it. 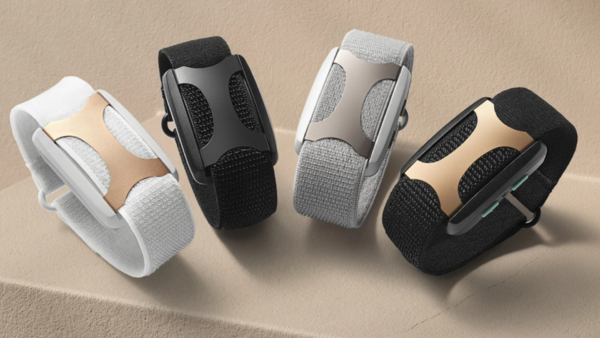 There are seven different frequencies, or Modes, that the Apollo wearable offers. Clear and Focused mode can deepen your focus on any task at hand — whether that’s clearing your inbox, tackling a workout, or deep work. Social and Open mode can elevate mood and relieve stress in social situations. Rebuild and Recover mode can help ground yourself during psychedelic experiences. There are also frequencies that will put your body in a meditative flow state, a relaxed state, and one to help you unwind into deep sleep. The more you use it, the more naturally your body will learn to sync with whichever frequency you are using.

Importantly, the effectiveness of the Apollo wearable is backed up by extensive scientific study. For example, the University of Pittsburgh found that the Apollo wearable increases “the ability to focus and remain calm during periods of stress and that these specific vibration patterns improve the body’s ability to recover and be resilient to stress.” Similar studies have shown it improves athletic recovery, and supports access to meditative states. Impressively, in the meditation study, “naive meditators’ EEG signatures looked like those of experienced meditators within twelve minutes” of using the Apollo wearable. Likewise, other studies have shown it increases time spent in deep sleep by 19% on average, and increases focus and concentration by up to 25%.

Stunningly, a study of nurses using the Apollo wearable over the course of only two weeks, found that their stress and anxiety levels fell by an average of 40%! On top of this, their sleep, energy, mood, and focus all also improved.

Already, therapists are using the Apollo wearable. For example, neurofeedback therapist Heather Hargraves of Divergence Neuro swears by the device, saying “I love my Apollo, I use it all day every day, and my clients like it too.”

To learn more about the Apollo wearable, visit their website.