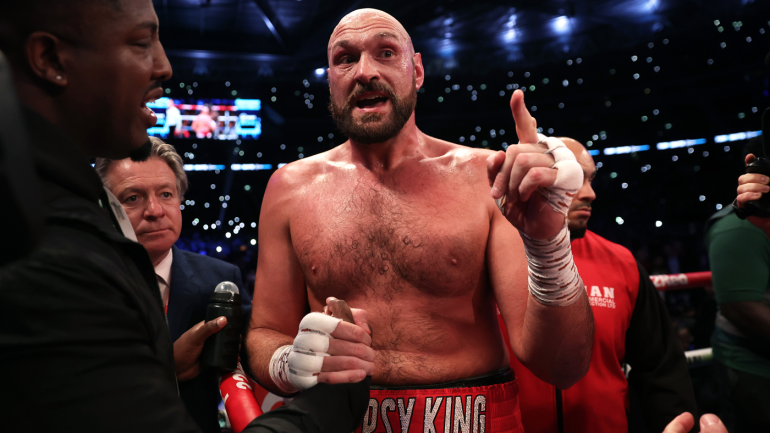 To the shock of few, WBC heavyweight champion Tyson Fury’s retirement looks like it will not stick. Fury, who retired in the ring after his April knockout of Dillian Whyte, has announced that he is now aiming to return to the ring against former foe and fellow English star Derek Chisora.

Fury (32-0-1, 23 KO) defeated Whyte with a brilliant uppercut in the sixth round of their clash, which was Fury’s first fight after ending his trilogy with Deontay Wilder with back-to-back knockouts. He now is looking for another trilogy fight with his callout of Chisora, whom he defeated by decision in 2011 and stoppage in 2014.

“You’re running, Derek, from the trilogy,” Fury said in a video posted to Instagram. “You call yourself war, you should call yourself chicken. I’ve decided to come back to boxing because I can be the first heavyweight world champion in history to have two trilogies. I’d always say I’d fight Derek Chisora at the end of my career.”

A potential fight with Chisora would be disappointing for many boxing fans. Chisora (33-12, 23 KO) is well past his prime and just snapped a three-fight losing skid in his most recent fight with a win over Kubrat Pulev.

Instead, fans and media have wanted Fury to turn his attention to a fight with the winner of the upcoming rematch between WBA, IBF and WBO champion Oleksandr Usyk and ex-champion Anthony Joshua to unify the heavyweight titles.

However, Fury getting back in the ring does breathe more life into the possibility of a bout for the undisputed title down the road more than if Fury is simply sitting on the sidelines insisting his retirement would stick.

Fury did not indicate a date or location for his potential bout with Chisora.