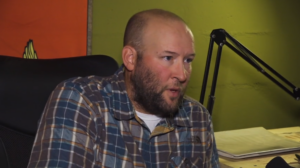 U.S. Army W.T.F.! Moments is a Facebook page featuring fun and entertaining content for veterans. Jake Ford, co-host of one of the podcasts featured on U.S. Army W.T.F.! Moments, described his show: “The show I’m involved with, we talk about pop culture stuff, the next Marvel movie or the new video games that come on or whatever, all the stuff that that veterans are interested in,” said Ford. “The guy who I’m with, CQ, he’s a professional comedian and great guy, and he was wounded pretty hard in Afghanistan, actually. We talk about that stuff, and we have guys who call in and just want to hang out. It’s a good time.”

According to Ford, the Facebook page is constantly updated with new content, while the shows air five nights a week from 6-8 p.m.

“There’s a show five nights a week, and some of them talk about current events, some of them talk about issues facing the Army after duty, National Guard, Reserve component, retiree stuff,” said Ford. “And so, we try to reach out to guys and, additionally, veterans who have problems, we try to connect them with people who can help them whether it be the VA or the DAV.”

For more information about U.S. Army W.T.F.! Moments and their shows, visit their Facebook page here.