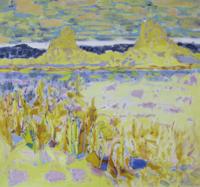 The “Deep in Land” exhibition in the Marie Walsh Sharpe Gallery at the UCCS Ent Center for the Arts runs through July 14. The show presents paintings by award-winning Australian artist Jo Bertini with accompanying audio-visual imagery courtesy of musician-composer Thomas Studer.

The exhibition is the product of a collaboration between the UCCS Galleries of Contemporary Art and the Smokebrush Foundation for the Arts, both of which welcome Bertini on Thursday for an artist’s reception and a Visiting Artists & Critics Series lecture.

Bertini’s work is a joyous, highly meditated explosion of color.

“Thirty years ago,” she says, “I was accused of being pale. Now everyone talks about me being a ‘colorist’ or a ‘modern post-expressionist.’ I don’t know, it’s just the brightness.”

People ask her about the “surreal” color in her work, and it’s just what she sees; “like, of course that shadow is purple,” Bertini laughs, “I don’t know what to tell you. … The world is full of those colors. None of this to me is invented or exaggerated.”

Growing up in Australia, Bertini’s proximity to the desert was always pronounced; after all, she says, “over 70% of inland Australia is desert. … I’ve always been fascinated with them.”

For 10 years, Bertini worked as an expedition artist for scientific and ecological surveys in the most remote and inaccessible corners of her country. That meant walking beside pack camels for miles upon miles.

Yes, walking beside them. “Oh, we didn’t ride them,” she laughs. “They just carried all of our stuff.”

This also meant walking with botanists, geologists and anthropologists, who taught her to see the desert environment for its parts — the rock outcrop and the wallaby scat and that Boab tree — as well as for its cohesion.

Bertini went on to explore deserts the world over, painting and marveling at “all the synergy and all the difference” connecting these ecosystems that are separated by oceans, by entire continents.

Eventually, she ended up in the New Mexico desert, and that’s what “Deep in Land” is about — it’s all portraits of the American Southwest.

“These landscapes, …” Bertini struggles for an appropriate descriptor. “They’re like acts of God.”

Bertini laments that she just hasn’t had enough time, that she’s just “scratched the surface of the American Southwest.”

“Deep in Land” is Bertini’s first public exhibit in the U.S., and she has so much more she wants to do here.

“It is a real privilege to live in another person’s world,” she says, “It’s like a kid has lent me their bicycle and I get to play with it.”