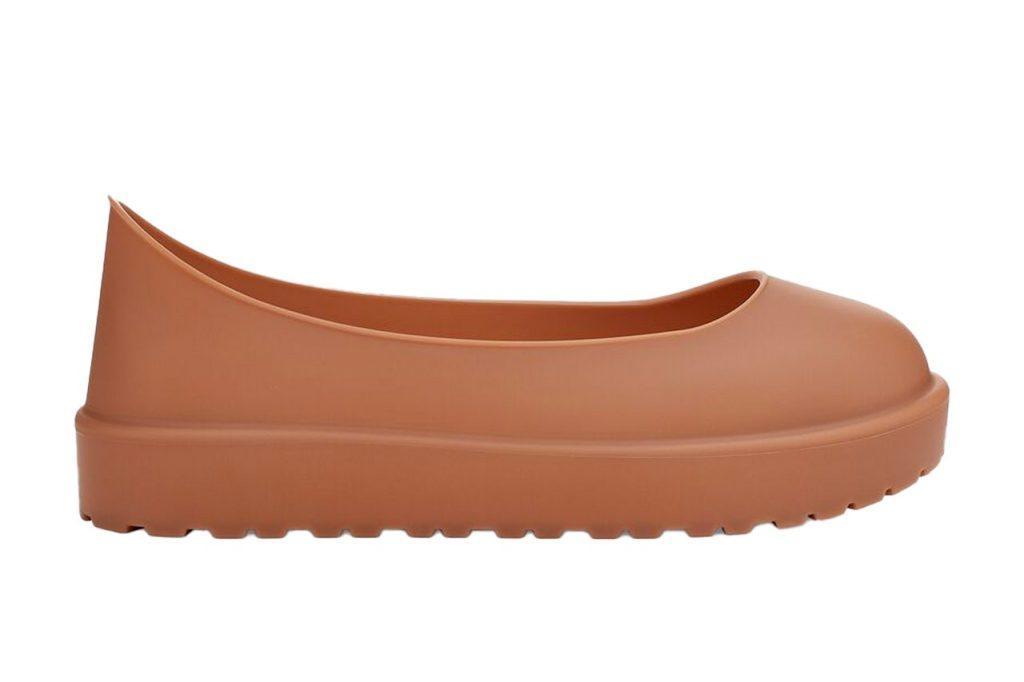 It started as a bold idea from an intrepid sneakerhead on Instagram: a pair of Salomon S/Lab XT-6 sneakers wearing a strange rubber outer layer. Based on the number of flame emojis in the comments section, it seems to be a hit. Not long after the original post, the popular streetwear account Hidden reposted the picture. Soon, it jumped platforms to TikTok, where the almighty algorithm did the rest. Several users began posting all sorts of sneakers wearing the rubber wrap, from Nikes and New Balances all the way to shoes from Yeezy and Rick Owens. One video of a wrapped pair of Nike Dunks raked in over two million views. So, what exactly was this thing?

It’s the Ugg Boot Guard, a utilitarian galosh made of silicone rubber intended to wrap snugly around your favorite pair of fleecy boots. It also looks, slowly but surely, to be winning over adventurous sneakerheads.

This content can also be viewed on the site it originates from.

Designed to be used with Ugg’s flagship fuzzy boots, which are famously not designed for rain, the Boot Guard comes in several colors. There are some louder shades to choose from—taffy pink, canary yellow, icy baby blue—but the sneakerhead-approved fare seems to be the earthy chestnut or the not-fully-opaque black. And it turns out you can throw the guard on whatever shoe you please. The practical appeal here makes sense. Sneaker lovers have long gone to extreme lengths to keep their kicks looking box-fresh: premium cleaners, protection sprays, special wipes, you name it. But one gets the sense sneakerheads are buying these for style rather than function. Because rubberized outdoorsy footwear has been trending for some time now, and all of a sudden the Ugg guard presents a way to merge the look with whatever sneakers you happen to have handy.

The luxury house Bottega Veneta’s footwear program has put rubber front and center for a few seasons now: the tastemaker-approved Puddle boot and sandal, the Rubber Flash clog. You’ll also find similar fare at Prada and Balenciaga, especially Demna’s ultra-statement Trooper Rubber Boot. And then there’s the Fear of God California mule, a hit from a label that has long embraced earthy and desaturated hues. The rubber boot bottom, too, is an established motif now spotted in all corners of the boot spectrum: just look at the Prada Monolith boots or the mid-market Diemme Balbi Basso boot, or even and the more affordable heritage classic, L.L. Bean’s Duck Boot. The idea of rubber-as-design is now a constant in contemporary menswear collections.

At $50 a pop, the Ugg Boot Guard feels like an easy way to boot-ify your favorite pair of sneakers, giving them a splash of the material now seen on designer footwear. To date, only a handful of sneakerheads have tried the sneaker-and-guard look, but if the Instagram Explore page and TikTok algorithm have taught us anything, it’s that where one daring person goes, others may soon follow. Besides, having some weatherproof shoe guards in your closet heading into the slush and snow seasons might not be the worst thing.