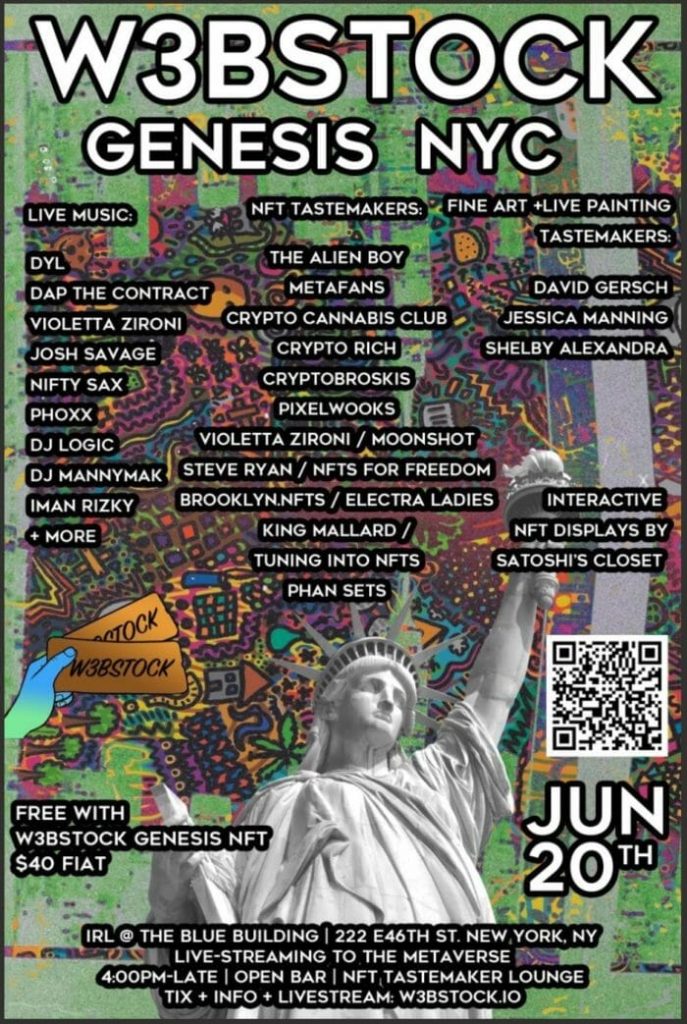 W3BSTOCK, the first-ever music festival powered by blockchain technology, owned and organized by NFT holders, has announced an event on June 20 at Manhattan’s Blue Building. The evening will feature musical performances, art and an NFT gallery.

The W3BSTOCK event will include live music from Brooklyn rapper DAP The Contract and New York’s DJ Logic. Also, attendees will have the opportunity to immerse themselves in art by Dyl, Violetta Zironi, Nifty Sax, Josh Savage and Moneyytree. Additionally, the one-night affair will include a VIP tastemakers gallery with MetaFans, Crypto Cannabis Club, CryptoBroskis and other creatives. The evening will also host an open bar, interactive NFT kiosks and more.

“As long as the NFT space is rampant with projects with zero utility, there will never be wider adoption to harness the power of this technology to make the world a better place,” remarked Brian Stollery, W3BSTOCK Founder, Launch CEO and NFT.NYC Speaker. He continued, “By uniting the brilliant artists and thought leaders throughout the fledgling music NFT space into a DAO, W3BSTOCK is demonstrating the potential of NFTs to elevate culture and entertainment as a whole.”

The project was formulated due to the ongoing popularity of NFTS as an online investment activity. As a result, the founders of W3BSTOCK – Brian Stollery, Ty and Dylan Fleischut, and Darian Mongiovi – had the idea to create an innovative NFT project that united community members to leverage blockchain and web3 technology to make it easier to create continuously evolving live music, entertainment and event production organizations.

See the poster for the forthcoming event below.