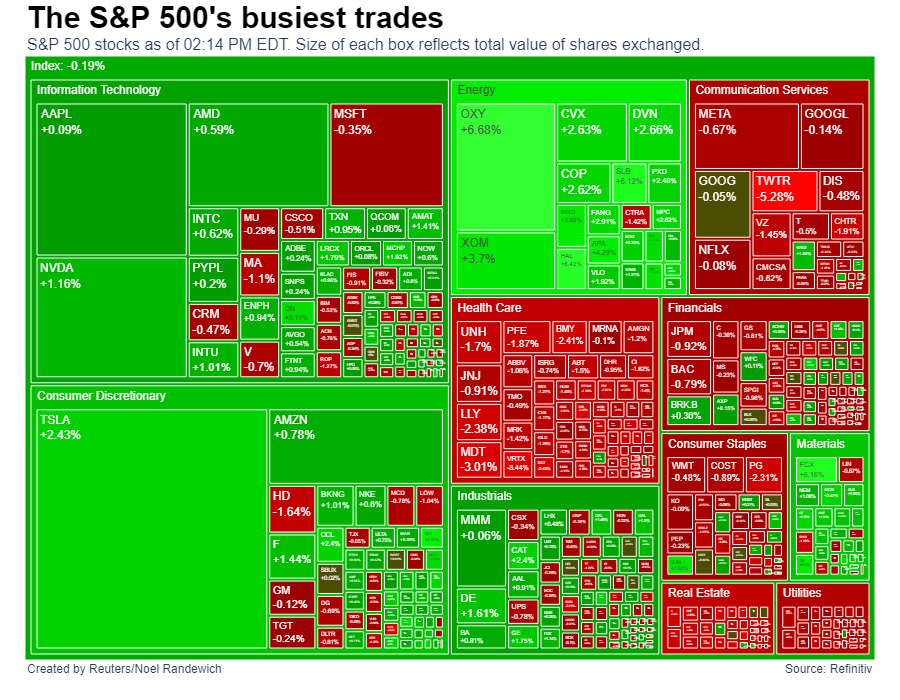 Aug 23 (Reuters) – Wall Street ended down on Tuesday as investors focused on data showing a slowing economy ahead of a U.S. Federal Reserve gathering later this week in Jackson Hole, Wyoming.

The S&P 500 dipped after data showed private-sector business activity in the United States contracted for a second straight month in August, with particular softness in the services sector as demand weakened in the face of inflation and tighter financial conditions. read more

The S&P Global flash composite purchasing managers index, or PMI, for August dropped to 45, the lowest since February 2021, from 47.7 in July. A reading below 50 indicates a contraction in activity.

Stocks have declined in recent sessions ahead of this week’s central bank gathering in Jackson Hole, where Fed Chair Jerome Powell is expected on Friday to reinforce a strong commitment to stamp out inflation running at four-decades high.

Traders are split between expecting a 50 basis points hike and a 75 bps hike by the central bank after several policymakers recently pushed back against expectations of a dovish pivot and emphasized the Fed’s commitment to fight against inflation. FEDWATCH

“What we have seen in the past week is the realization that the Fed could still raise interest rates by 75 basis points in September,” said Jake Dollarhide, chief executive of Longbow Asset Management in Tulsa, Oklahoma. “The market fears that Powell’s going to go back into a hawkish stance.”

The benchmark 10-year yield rose to its highest level since late July.

After a rough start to the year, markets rallied since mid-June on hopes inflation has peaked, but that summer rally snapped last week due to renewed fears around an aggressive monetary policy tightening path by the Fed.

The S&P 500 energy index (.SPNY) rallied 3.6%, tracking a jump in crude prices as tight supply moved back into focus.

Declining stocks outnumbered rising ones within the S&P 500 (.AD.SPX) by a 1.5-to-one ratio.

Volume on U.S. exchanges was relatively light, with 9.4 billion shares traded, compared with an average of 10.9 billion shares over the previous 20 sessions.

Reporting by Bansari Mayur Kamdar and Devik Jain in Bengaluru and by Noel Randewich in Oakland, Calif., Editing by Marguerita Choy