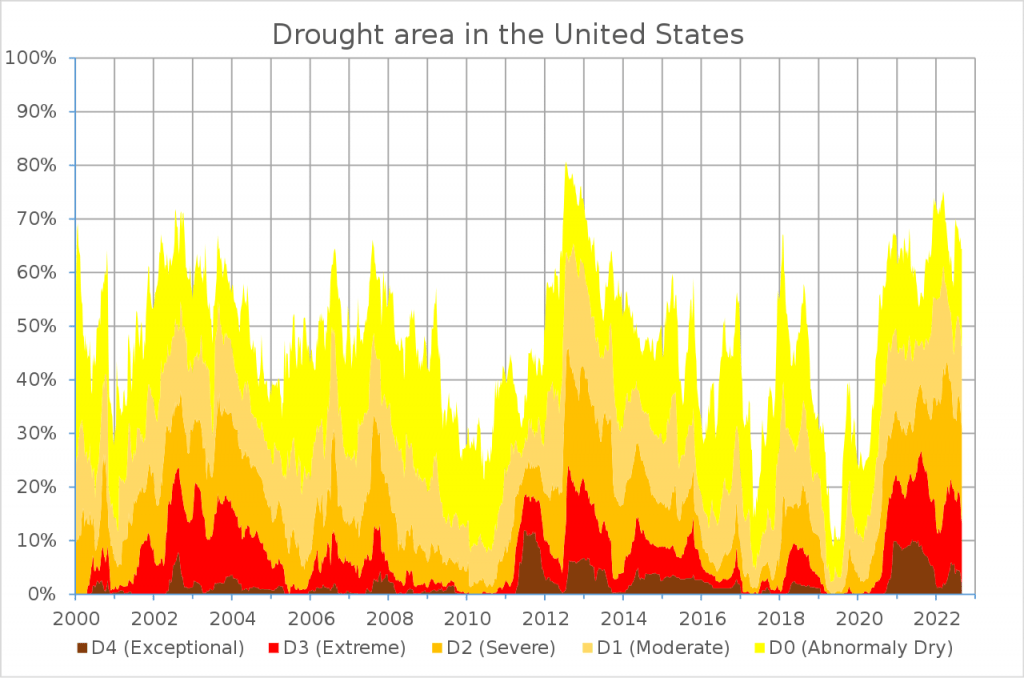 Droughts don’t particularly come to mind when people think about weather-related damage and natural disasters. This may be because droughts aren’t as visually devastating as hurricanes ripping mercilessly through a community, such as the recent Hurricane Fiona that destroyed parts of Puerto Rico or Hurricane Ian that barrelled through Florida. But droughts cause more damage to communities, and buildings, than you may think. Droughts are second only to hurricanes as the costliest weather-related disaster in the United States. And unlike other natural disasters, it’s much harder to predict when a drought will begin or end, so they’re harder to prepare for.

Believe it or not, droughts can cause physical damage to commercial buildings. When a drought occurs, the lack of water in the soil causes it to shrink around a building. This results in uneven settling that can cause damage to a building’s foundation that may not be obvious at first. Eventually, the foundation may reveal signs of cracking, and any compromise to the building foundation can later cause damaged pipes, sloping floors, warped windows, and more.

Physical damage to buildings isn’t the only way droughts can hurt commercial real estate owners. “We are getting plenty of painful lessons on how drought can reduce the viability of living in dry areas and areas that draw water from drought-stricken sources,” said Ross Sheil, SVP Global Revenue at Infogrid, a smart building software developer.

News about droughts was all over the headlines this past summer. Over the summer, the number of states affected by moderate or severe drought varied from 40 to 42. Due to extreme heat and lack of rainfall, the worst drought conditions have persisted in states like Texas, Arizona, and California. California is suffering from its worst drought in a staggering 1,200 years, as nearly three-quarters of the state is either in severe or exceptional drought. Scientists say climate change will likely worsen droughts in the years ahead. Warmer temperatures enhance evaporation, thereby reducing surface water and drying out soils and vegetation, creating periods with lower precipitation.

Commercial properties with the technology to reduce water use and waste can help protect themselves from these drought conditions. One of the consequences of drought is the availability and quality of drinking water. Reduced stream and river flows increase the concentration of pollutants in water and cause water stagnation, creating breeding ground for mosquitoes and West Nile Virus. Commercial buildings in areas heavily affected by drought will increasingly have to deal with consequences like this that may not directly impact the property but certainly impact the quality of life in the area.

Percent Area in U.S. Drought Monitor Categories since the year 2000

Forty percent of the lower 48 states in the U.S. have been under a drought warning not just this past summer but for the last 100 weeks. That means this goes all the way back to September 2020. The mega-drought on the West Coast may last for another 8 years. What’s worse, some of the most drought-impacted states in the U.S. are projected to have the strongest population growth in America. For example, Arizona’s population is projected to grow by 26.1 percent between 2020 and 2040, according to a study by the Weldon Cooper Center for Public Service at the University of Virginia. Arizona residents have also been living through a historic drought, as six cities in the state officially declared water shortages over the summer. Commercial real estate could feel the impacts of drought more in the future if property owners haven’t already.

Water conservation is essential in drought-stricken areas, and it may even be required by state and local authorities. Commercial real estate can play a huge role in water conservation because many properties are massive water consumers. The typical federal building with 200 employees uses 3,000 gallons of water per day, equating to about 800,000 gallons per year. Commercial buildings have similar consumption ranges, covering everything from sinks, toilets, outside irrigation, drainage, cleaning, and, in some cases, heating and cooling.

Providing safe, secure, and reliable water requires facilities management teams to understand a building’s water consumption and manage it effectively. The risk of water-borne diseases like Legionnaire’s Disease must be mitigated by keeping water supplied within safe temperature ranges. Water must be moved to keep it from stagnating, and safety measures usually include maintenance staff regularly flushing outlets and taking temperature checks. Historically, all these tasks have been done manually, which leads to thousands of gallons of water being used.

In addition to the routine safety of water supply, water is also wasted in commercial buildings through other means. Surprisingly, leaks account for more than 6 percent of an average commercial building’s water use, according to the EPA. Leaks and continuously running water aren’t always visible, but they can quickly add up to high water utility bills and waste. Inefficient outside irrigation is also a big water waster. Exterior landscaping accounts for about 20 percent of potable water consumption in a typical commercial property. And restrooms consume more water than any other area in a building, roughly 37 percent by some estimates. A single leaky faucet can waste more than 3,000 gallons of water per year, and most buildings have plenty of leaky faucets.

Many commercial properties may still live in the ‘dark ages’ regarding water conservation. This is because building managers don’t have the data to know how much water they consume and waste. Without that data, knowing where to start and how to best use technology to optimize water conservation and energy savings is hard. Using Internet of Things (IoT) sensors and artificial intelligence are helping some property owners get a better handle on water consumption.

One example is pipe monitoring solutions in large buildings, where the property may have miles of water supply piping. Building owners can monitor temperature and water flow remotely via sensors to determine where water is stagnating and might create conditions for Legionella. Traditional, manual solutions for pipe monitoring require all outlets and taps to be flushed between two to three minutes every week. Using IoT sensors for pipe monitoring, only 2 percent of taps require manual flushing, saving water wasted through preventive line flushing. It also reduces the need for engineers to visit building sites regularly, saving labor and transportation costs.

Another way technology is helping is through leak detection. Sensors and AI-powered software can provide quick alerts if they detect when water drips or pools, which saves a building thousands of gallons annually. It’s a water conservation measure, but it also helps guard against internal building damage from accumulating water that leads to dangerous mold conditions.

Onsite water reuse is another technology gaining steam in commercial real estate. The tech was developed by Aaron Tartakovsky and his father, Igor, as part of the Bill and Melinda Gates Foundation’s “Reinvent the Toilet Challenge,” a contest that probably drew tons of jokes but also some great ideas. The water reuse technology captures and processes a building’s wastewater, producing recycled water for non-potable applications like toilet flushing, recovered waste heat energy, and repurposed organic solids for natural soil treatment.

Tartakovsky’s company, Epic Cleantec, has installed an onsite water reuse system at the NEMA building, a 754-unit multifamily complex in downtown San Francisco. An operational greywater reuse system has also been installed at Related’s newly opened Fifteen Fifty in San Francisco, a 1.2-million-square-foot luxury residential development. Epic Cleantec has partnered with other major developers in the U.S. and has planned installations in multiple states, including at the 1.3-million-square-foot Park Habitat commercial project in San Jose. The system at Park Habitat is expected to produce 30,000 gallons of highly purified recycled water daily to irrigate 20 stories of plant life and divert tens of thousands of pounds of wastewater organics from landfills.

While technologies like onsite water reuse systems can significantly reduce water usage, some property owners are having trouble justifying the cost. In particularly drought-stricken parts of the country like California, office owners say they’re running out of options to reduce water usage without making big-dollar investments that are challenging to enact given high vacancy rates. Some owners may be in the ‘dark ages’ regarding water conservation, but the severity of California’s droughts means many office owners have already implemented cutting-edge conservation technologies, sometimes being forced to by state and local governments. And despite drastically reducing water usage, office owners are facing calls for even more cuts.

In addition to government mandates, property firms are setting their own goals when it comes to water conservation. Kilroy Realty is close to reaching its goal of reducing water consumption by 20 percent compared to its 2015 baseline. The firm’s water usage is down 17 percent as of 2021, but shaving off the remaining percentage points will be tough sledding. The company is looking at its HVAC systems for additional water savings, some of which use water-cooled towers.

Kilroy has already used strategies like reclaiming water for watering plants or flushing toilets. The firm is also looking at where landscaping can be replaced with drought-tolerant plants and whether pressure-washing certain exteriors, roofs, and windows can be reduced. Cutting back on cleaning and landscaping makes a difference in the appearance of buildings at a time when office landlords need to make an especially good impression in a challenging office market. Finding a balance between aesthetics and water conservation has become difficult for some facilities in California and other drought-stricken areas.

Water reuse systems can save a ton of water, but they are a costly improvement and one that some landlords fear won’t get a quick return on investment. With the office market still in turmoil, there’s little to no guarantee buildings with improved sustainability, like more water conservation improvements, will be filled by tenants. On the other hand, if landlords are willing to risk the investment, water conservation’s public relations boost can help attract tenants.

Technologies like AI-powered leak detection and onsite water reuse systems will become more critical for commercial real estate in the future. Drought conditions nationwide are predicted to worsen in the coming years, and water scarcity will become an increasing concern, especially in Western and Southwestern states with the driest conditions. Commercial buildings are enormous water consumers, but they have several options that can help.

Adding water-saving measures to a commercial building can make it less vulnerable to fluctuations in water supply in a time of scarcity and give it a competitive edge in attracting and retaining tenants. Water scarcity is no longer hypothetical in many parts of the U.S., and building owners must adjust to this new reality. Hurricanes may be the most fearsome weather-related disaster, but droughts can be just as dangerous and costly.