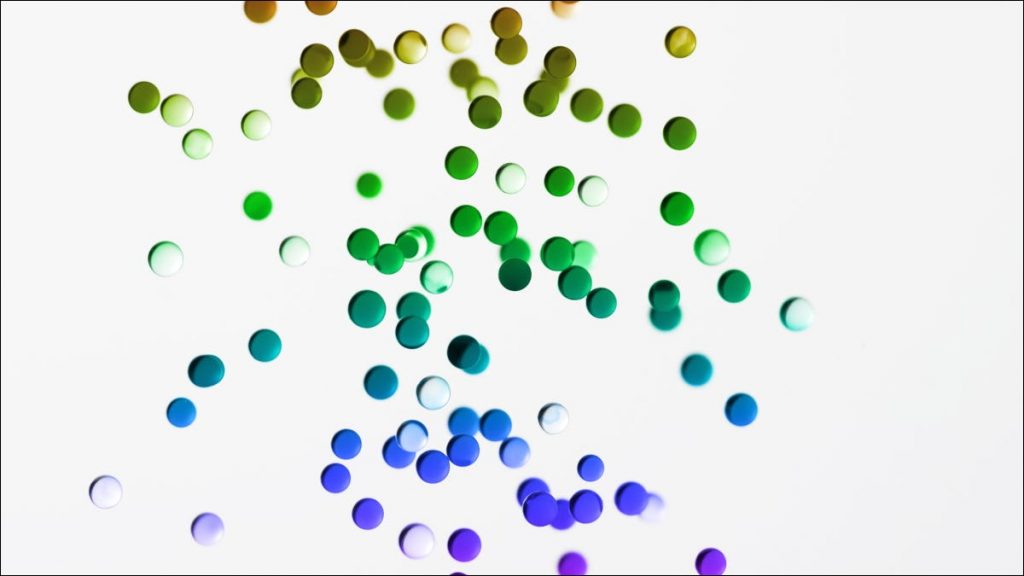 Quantum dots are making waves in the world of TVs and monitors, but what are they exactly? Is this just another abuse of the word “quantum” by marketers, or are these dots as amazing as they’re made out to be?

Quantum dots are particles of semiconductor material just a few nanometers across. Also known as “artificial atoms” (despite being much larger than an atom) these dots act in a similar way to atoms when it comes to their relationship with electrons. They are so small, that their electrons are “trapped” and behave similarly to atoms. When UV light hits a quantum dot, its electrons are raised to a higher energy state. When the electrons fall back to their base level the difference in energy between the two states is released as light.

They are referred to as quantum dots for two reasons. First, they exhibit quantum properties thanks to how they confine electrons within themselves. Quantum effects are those sub-atomic laws of physics that scientists are still trying to fully understand, but we can already apply them in devices like quantum computers.

What Makes Quantum Dots So Useful?

Quantum dots behave like atoms that have been excited, but they differ in one fundamental way. The light you get out of an atom or a quantum dot is equal to how much energy was absorbed and released, which determines the wavelength and therefore color of the light. However, one type of atom (e.g., iron, sodium) will always emit the same wavelength of color.

Quantum dots, on the other hand, can all be made from the same semiconductor material, but produce different wavelengths depending on their size. The larger the dot, the longer the wavelength, and vice versa. So bigger dots tend towards the red end of the spectrum and smaller ones to the blue end.

How to Make Quantum Dots

Quantum dots have a precise structure because they’re crystals.  The silicon wafers that our microchips are made from are likewise grown as crystals, which self-organize into atomic patterns. This is why we can make quantum dots with precise structures at the nano-scale. If we had to build them one atom at a time, they wouldn’t be very practical!

They can be made by firing beams of atoms at a substrate to build crystals, you can fire ions (free electrons) at your semiconductor substrate, or by using X-rays. Quantum dots can also be created using chemical processes, and even using biological processes. However, biological manufacturing research is still in the very early stages.

Where Are Quantum Dots Used?

Apart from the QD-OLED and QLED displays most people know quantum dots from, there are numerous applications for these invisible specks in many different technologies.

Solar panels are a major potential application of quantum dots. Today’s silicon-based solar cells are already quite efficient at gathering energy from light, but because quantum dots can be “tuned” to absorb light from various parts of the electromagnetic spectrum, they could bring about much more efficient solar panels. Not only would these panels be more efficient, but they’d also be cheaper to produce since the process to make the necessary quantum dots is relatively simple.

Theoretically, you could make a pure quantum dot solar cell, but they can also be used in hybrid solar cells. Boosting the efficiency of other solar power technologies.

Quantum dots can be used in photon detectors, have exciting potential in biomedicine, and could even make for much cheaper and more efficient light-emitting diodes.

One exciting application of quantum dots is in cancer treatment, where dots are designed to accumulate in specifically targeted organs to release anti-cancer medication as well as advanced imaging. They can even play a role in the early diagnosis of tumors.

RELATED: What Is a QD-OLED Display?

What we do understand is how versatile they are and what amazing technological innovations beyond making nicer computer screens they’ll enable. So the next time you marvel at the vividness of your QLED TV, spare a moment to think of the amazing subatomic magic that’s happening so you can get a nicer picture and how, some day, quantum dots could be doing important jobs inside your body and out in the world.