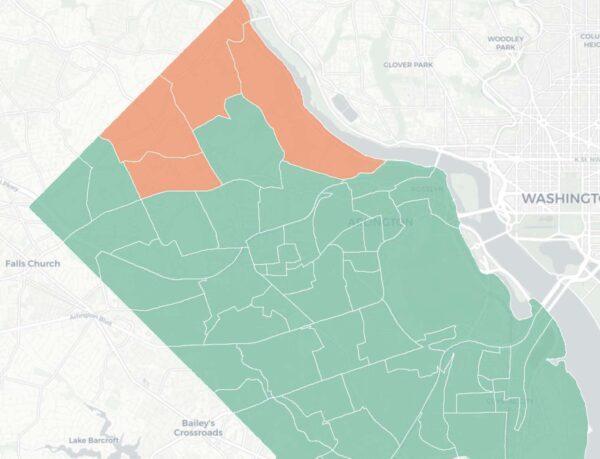 (Updated at 4:10 p.m.) Arlington’s Missing Middle housing proposal has aroused plenty of passion, but the strong opposition (and support) only registered a blip in last night’s election results.

Democrat incumbent Matt de Ferranti easily won his re-election bid for the Arlington County Board, with 61% of the vote to 28% for Audrey Clement and 10% for Adam Theo. (All but one county precinct have reported results as of publication.)

Leading up to the election, Missing Middle — a series of zoning changes that would potentially allow the construction of townhouses, duplexes and 3-8 unit buildings in districts zoned for single-family homes — had become a battleground issue for candidates.

De Ferranti staked out a middle ground on the issue, supporting lower density types such as duplexes, three-unit townhomes and fourplexes, but not eight-plexes, while independent candidate Adam Theo did not support any caps on density.

Perennial independent candidate Audrey Clement opposed the plan full-stop based on concerns about its impact on the environment and county infrastructure, as well as concerns of displacement.

Proponents of the zoning change say last night’s results indicate as the support of most residents and the County Board needs to crack on with approving it.

“Arlington County voters have spoken,” said YIMBYs of Northern Virginia in a statement. “In a race that was widely seen as a de facto referendum on the Missing Middle housing proposal, 70% of voters chose a candidate who ran in support of these zoning reforms. Legalizing diverse forms of housing throughout Arlington County is not only existentially important to making the housing market function again and building a more inclusive Arlington. It is also good politics.”

The organization’s Activism Coordinator Grace White said Arlington is mostly made of renters and people who live in multifamily buildings, but they’re constrained to 25% of the land.

“To them, Missing Middle housing is a no-brainer, and necessary for them to see any kind of future here,” she said.

Opponents, like Arlingtonians for Our Sustainable Future, say the proposal has the same flaws today as it did the day before the election, and its members will continue educating voters about what those are.

“Speaking for ASF, the only way to really know in a comprehensive way what Arlington residents think on Missing Middle would be to have a referendum,” says group founder Peter Rousselot. “That would be a clear way for people to express how they feel about Missing Middle. In an election we just had where there are so many other issues being talked about, the whole impact is diluted a lot.”

“The results show that while people who are opposed to Missing Middle have been visible at public engagement sessions and with yard signs,” Hamilton continued, “most voters didn’t cast use their vote to oppose Missing Middle.”

Arlington County Republican Committee communications chair Matthew Hurtt says the debate split Arlington Republicans, too, with an “overwhelming majority” of the Arlington GOP opposing the proposal, but “a strong contingent” of Young Republicans supporting it.

(Theo, who has described himself as “an independent progressive libertarian,” has advocated for streamlining building permits, lowering property taxes and allowing more housing to be built.)

Despite the divide, Arlington County Democratic Committee chair Steve Baker says he hopes the problem of housing affordability can get Arlingtonians to work toward a solution.

“I think we all agree that in a county where a residential lot costs over $1 million, that housing will remain one of our key issues,” he said. “Even though some candidates tried to use our varying views to divide us, Arlingtonians voted to affirm that we can solve our biggest challenges together.”

What this means for minority politicking

It’s difficult to dethrone a Democrat incumbent in Arlington, although many have tried — including Clement, several times.

Since 1980, there have been 29 elections in which a Democratic incumbent was challenged, and every time, the Democrat incumbent — and often their “non-incumbent” running mates, as well — have won, says former Arlington County Treasurer Frank O’Leary, who regularly issues election predictions.

On average, the victors netted on average 67% of the votes cast, with the record set in 2011 by incumbents Mary Hynes and Walter Tejada, who received 87%, he says. Democrats won on the slimmest margins, earning 55% of the vote, in 1987 and 1999, when the incumbents faced strong Republican candidates.

“When a political party has a stronghold in a region, it is very difficult for the opposing party to gain traction,” says Marymount University professor Margaret Tseng, whose research specializes in minority politics. “The dominant party benefits from incumbency, name recognition, and a stronger fundraising apparatus.”

And Arlington Democrats are so effective that even some members of the party have taken issue with how much sway it has, particularly in what are supposed to be non-partisan Arlington School Board races.

What would be most helpful, says the local GOP’s Hurtt, would be “an organized anti-establishment movement to counter the farcical ‘Arlington Way‘ narrative of the ACDC rubber stamp County Board.”

Hurtt says he personally thinks Clement “raises many good issues that otherwise would likely not be raised during the campaign cycle,” but subconsciously for many voters, “Clement’s seriousness as a candidate diminishes with each annual campaign effort dating back to 2011.”

Jeremy Mayer, an associate professor at the Schar School at George Mason University, says this was a badly missed opportunity for Republicans.

“They should have run a moderate who coherently opposed Missing Middle, and instead, they let two gadfly perennial candidates take opposite sides of the Missing Middle debate, and both go down in futile defeat,” he said. “There are thousands of Arlington Republicans, and in the last few decades, they can occasionally get a seat in County politics. [Missing Middle] was one such upheaval that offered a chance at representation.”

In situations like this, political minorities will often lean into an issue that may win over independents or “leaners” and “often will look to negative campaigning in order to rally its base to the polls,” Tseng said.

For instance, independent John Vihstadt rode the proposed Columbia pike streetcar to a seat on the Arlington County Board, receiving a “stunning 56% of the vote,” O’Leary said. While Clement did that this time around with Missing Middle, Vihstadt had an edge because he was an incumbent — he previously won a lower-turnout special election.

An independent has not won since Vihstadt’s defeat in 2018 by de Ferranti, who received 53% of the vote. That’s despite Clement getting the former County Board member’s endorsement this year.

Tseng said another tactic non-dominant parties take is to try to boost voter turnout. O’Leary says Theo did just that.

“The extra votes he got — he wasn’t taking them away from Matt — these are people who never would’ve voted, except for him,” he said. “There were a number of people who contacted me after my initial prediction telling me that Theo had worked very hard at engendering people to vote who never would have voted.”

Tuesday’s election had relatively high turnout despite being a midterm, which historically have lower turnout rates than presidential years. Tseng theorized that could be because early voting is becoming more popular.

“Presidential election turnout usually ranges from 50-60% of the eligible voting population. Midterm elections typically are around 40%,” she said. “This midterm election will exceed the average turnout rate partly because of early voting options and several high-profile elections.”

“The problem is this: Missing Middle is a moving target,” Clement said. “The draft done last week is not the same as the one done in May, and the draft done in December is not what’ll be done in March.”

Julie Lee, a spokeswoman for another opposition group, Arlingtonians for Upzoning Transparency, likewise said that thousands of residents know nothing about the plan.

“We will continue to educate the public about this flawed plan that is being rushed for no apparent reason,” she said. “And we urge the Board to give careful consideration to something that may cause irreparable damage to many communities in Arlington.”

Theo says he will continue to support YIMBYs of Northern Virginia, which he co-founded.

“I was careful not to burn myself out with this campaign. I’ve had a long-term mission and that continues,” Theo said. “My immediate efforts will be going into YIMBYs of Northern Virginia, continuing to build it up to help Arlington’s future progress on housing affordability.”

As for the Arlington County Board, O’Leary says it needs to watch out for the next election year, which will likely have lower turnout with the national races out of the spotlight.

“This issue has not reached its peak by any means,” O’Leary said of Missing MIddle. “Next year could be more contentious and there will be no incumbent running.”