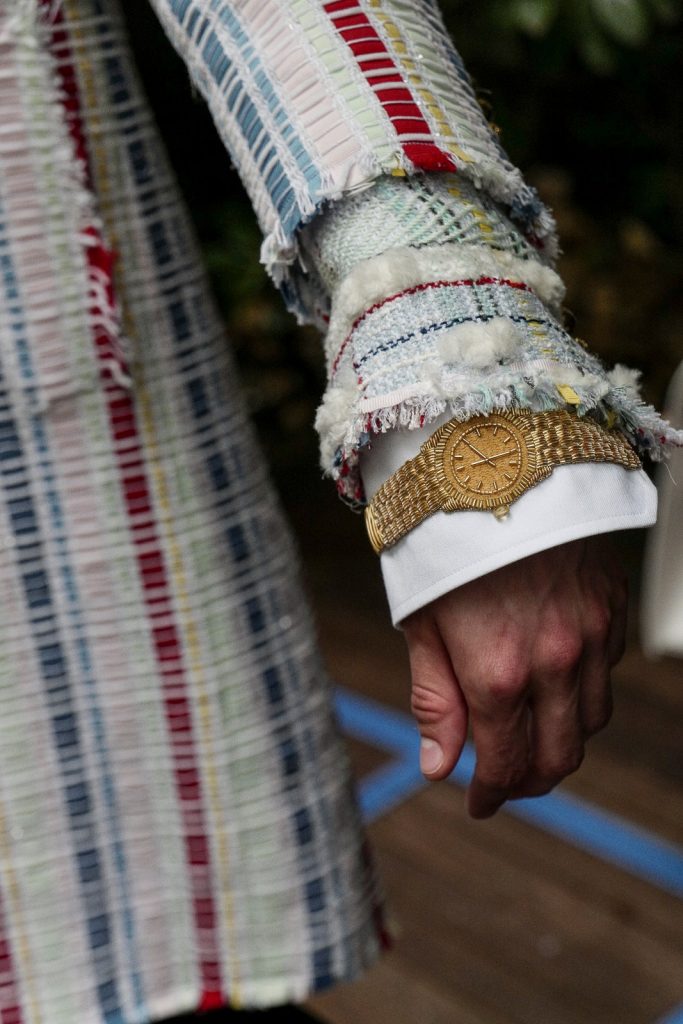 No one is better than Thom Browne when it comes to marshaling rich and famous men into a uniform of the designer’s choosing. It began when the well-heeled demo eagerly donned his famously shrunken ankle-baring gray suits, the cornerstone of his brand and business. And over the past several years, Browne has succeeded in persuading plenty of men to test the skirted waters. Now Browne is adding another element to his uniform: a Cartier Tank.

Stitched just below the models’ shirt sleeves at his recent Paris Fashion Week show were embroidered watches, mostly representing the Cartier Tank, with a few meant to look like the Rolex Day-Date, Browne confirmed via email. Like many things in his universe, the detail is stolen directly from the designer’s own wardrobe, with the embroidered version modeled after his own Tank. When asked what first drew him to it, he said, plainly, “The Cartier Tank is the most timeless watch. The most perfect watch.” It’s hard to argue with that reasoning: the Tank was designed in 1917 and remains a favorite over a century later.

The Tank was a perfect match to the show’s theme, according to Browne. “The collection was an homage to the heritage of sophisticated French couture fashion from the ‘40s and ‘50s,” he said. Browne seems to be nodding towards the French upper-crust’s devotion to the Tank. “They say that in Paris that if you were an aristocrat, when you were 21 years old, it was a rite of passage to be taken by your father to Cartier to get your first Cartier watch,” Cartier dealer and expert Harry Fane once told me. Now, all of Browne’s customers can dress like mid-century French aristocrats.

The Tank and Browne crossover is another signpost of the way watches are soaking into the bloodstream of high fashion. While the two rarely seem to meet in the middle—fashion the emotional artform and watches the mechanical tools—they are starting to get more comfortable with one another. A few years ago, Alyx introduced its very own Audemars Piguet Royal Oak, and Hermès now makes its own timepieces that collectors line up for.