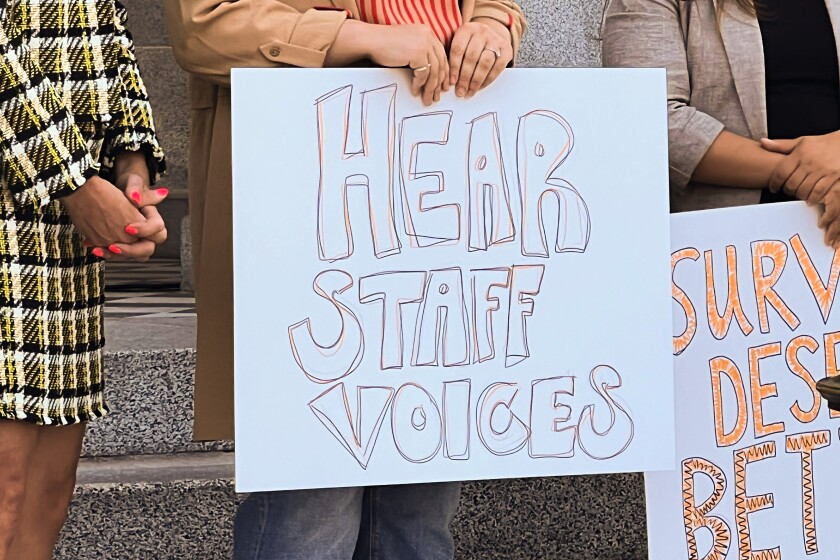 A coalition of former California legislative employees and women’s advocates Thursday called for changes and a public review of the state Capitol’s Workplace Conduct Unit, an independent investigative group created in the wake of the #MeToo movement to handle complaints of discrimination, sexual harassment and retaliation in offices of the Legislature.

During a Capitol press conference, several women said they were disappointed with the way the investigative unit has in recent years handled allegations of misconduct by supervisors and colleagues in the statehouse. They claimed that the process is too lengthy and often opaque and that their concerns weren’t handled in a way to spark meaningful change or hold alleged perpetrators accountable.

The group called on the Legislature to commit to holding a public hearing before the end of session in August, to determine what has and hasn’t worked so far with the unit.They also unveiled a pledge for elected officials and candidates to sign “to support the safety of California staffers and volunteers in politics and government.”

“Survivors and the public deserve an open forum for people to share with the public and the Legislature the pain and trauma caused by the WCU, so we can all move forward toward a more equitable future together,” said Ruth Ferguson, a co-founder of the group Stop Sexual Harassment in Politics. Ferguson wrote a recent op-ed in the San Francisco Chronicle alleging misconduct in her former legislative office and accusing the Workplace Conduct Unit of failing to properly handle her complaint.

Julia Johnson, executive director for the Workplace Conduct Unit, said in a statement that the investigative group is taking feedback seriously and agreed that “timeliness in investigations is important.” Johnson pointed to the hiring of additional investigators and other personnel to quicken the process, and said that the WCU reviews allegations “without guidance on how to conduct such investigations by either house of the California Legislature.”

“I encourage participants in our process who have concerns to share them with us so that we can continue to improve our processes,” she said.

But in a May 13 letter to legislative staffers and members, Atkins and Rendon said they would have discussions with the Legislative Women’s Caucus “to develop an evaluation of the WCU and gather recommendations for improvements from members and staff.” They said the goal was to “get those improvements in place by the end of this legislative session.”

“We know our work is not done,” the two leaders wrote. “This level of meaningful work takes ongoing attention and dedication, and we remain committed to that effort.”

The Workplace Conduct Unit was established at the start of 2019 after the #MeToo movement swept through the state Capitol and brought to public attention what accusers described as a tolerance of rampant inappropriate behavior in state politics. A coalition of more than 140 women first signed on to an October 2017 letter that called for culture changes in the statehouse, which snowballed into a larger public campaign for stronger accountability and new policies to crack down on misconduct.

Three lawmakers who faced public accusations of misconduct resigned less than a year after the letter was written, and a fourth left the Legislature for health reasons, though he was the subject of a harassment investigation. Several other lawmakers were reprimanded.

The Workplace Conduct Unit is supposed to be separate from the Legislature, and pledges to “conduct prompt, independent, and objective investigations of allegations.” The unit received 349 complaints between February 2019 and 2022, according to a March memo that Atkins and Rendon sent to staffers and members, and resolved 95% of the complaints.

Alicia Lewis, co-founder of We Said Enough, a group that helped bring the #MeToo movement to the Capitol, said on Thursday that it was time for the Legislature to reflect on what has and hasn’t worked with the investigative process.

“Where’s the reevaluation?” Lewis said. “Being able to have this call to action to say let’s look back, let’s talk about it, let’s get that feedback, let’s fill these gaps and make the changes necessary is going to be crucial if we’re going to have culture change.”