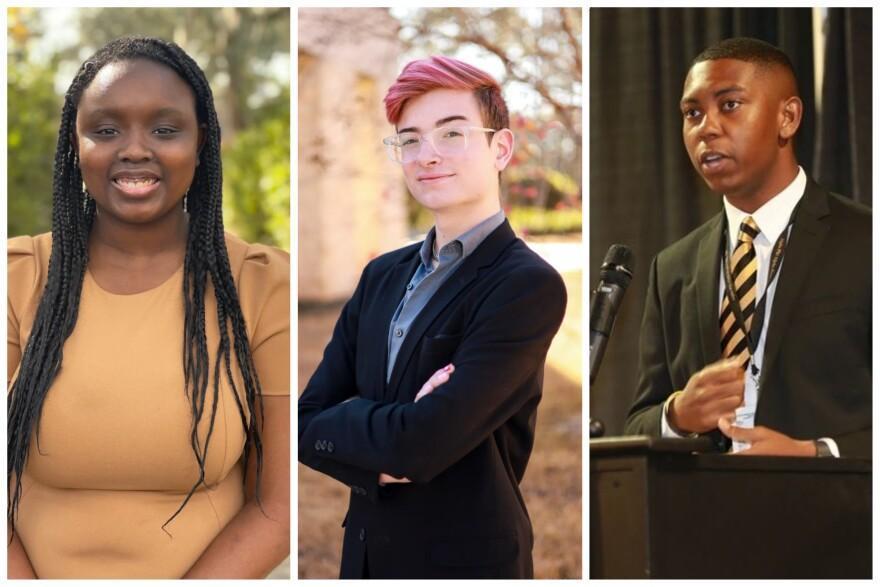 Florida’s youth electorate has the potential to make a seismic impact on the gubernatorial and senate races this election. The 2018 and 2020 elections saw record-breaking turnouts from young voters as major issues in Florida like reinstating voter rights and a historic presidential election were on the line.

Since the last election, Governor Ron DeSantis has signed some controversial bills into law such as House Bill 7 which banned the teaching of critical race theory in public schools, and the 15-week abortion ban earlier this year before Roe v. Wade was overturned.

For Ariauna Range, she knows that voting in the upcoming election could help reverse some of the policies put in place under the DeSantis administration that she doesn’t agree with.

“I know a lot of discussions have been about the education system, and critical race theory,” Range said. “I definitely disagree with what the state is doing. So I’d love to see similar legislation kind of backtracking what they did with CRT and getting that out of the education system.”

Range is the Student Senate Pro Tempore at the University of West Florida. The 19-year-old thinks younger generations can learn from older ones about organizing, but she wants older generations to not count out Generation Z or assume they’re not interested in politics.

“People have this perspective that Gen Z doesn’t try. But if you look at the gun reform movement from after the Marjory Stoneman Douglas shooting, to the Black Lives Matter movement that happened after George Floyd, Gen Z is definitely involved in politics. I think we just do it in a different way than older generations have done since we use social media.”

Even with increased civic engagement from young Floridians in 2020, the 18 to 24 demographic still had the lowest voter turnout.

This could be in part from disinterest in voting, but it could also be from a general lack of knowledge on where and how to vote. That’s why Steven Wiktorski the Student Affairs Committee Chair for UWF’s SGA is eager to help point his peers in the right direction for voting.

“There’s a lot of misconceptions that I found with my friends and people that go to UWF and Pensacola State College or some of the other schools,” Wiktorsi said. “Just not being aware of how voting works like early voting as opposed to regular voting on Election Day or requesting an absentee ballot. A lot of people don’t understand how those processes work, so I think maybe more initiatives by the city to make voters aware would be something that I’d like to see.”

Confusion from voters has been statewide, not just in Pensacola as the DeSantis administration works to crack down on what they believe to be voter fraud. In 2018, a historic ballot initiative passed with more than 60% of the vote, reinstating voting rights to non-violent ex-felons. Soon after, DeSantis signed a law requiring ex-felons to pay all fines and fees before having their rights reinstated. Footage obtained last month by the Tampa Bay Times and Miami Herald shows law enforcement arresting one of 19 confused ex-felons who were arrested for voting in the 2020 election. Following the election, DeSantis prided Florida on having one of the smoothest and most successful processes in the country. Yet, shortly after, he signed into law bill SB 90 which requires voters to provide more information to update their registration, restricts the vote-by-mail process, and restricts where voter drop boxes can be.

“There definitely is some confusion around the ways in which your opinions can actually be transformed into votes,” Wiktorsi said. “A lot of times younger voters aren’t familiar with that and may just think ‘my voice doesn’t matter.’”

But Tory Sanders, a recent political science graduate from the University of South Alabama, wants everyone to know that their voice and vote do matter.

“I really just wanted to make sure I always participate and really have my voice heard and try to vote for whatever I want to see,” Sanders said. “People need to believe that their voice and their vote do count.”

As a member of Alpha Phi Alpha Fraternity Incorporated, Sanders does voter registration drives and other events to inform the community and spread awareness about the importance of voting. During his time as an undergrad, he used his oratorical competition as an opportunity to encourage Millennials and Gen Z to become more involved in the electoral process.

Now, he is adamant about advocating for abortion rights and speaking against anti-CRT efforts on a statewide level, and advocating for more diversity in leadership positions in Pensacola.

“Something I’ve noticed in my personal experience as a young professional in Pensacola is I believe there needs to be more of a citywide effort towards diversity, equity, and inclusion, and just making sure the spaces that make changes on things that we care about are more diverse and everybody kind of has a voice in that.”

Whether it’s diversity, education, or healthcare issues, these young people want it to be made known that Millennials and Gen Z do care about the nation’s political climate. Through voting and other forms of civic engagement, they are making their voice heard.